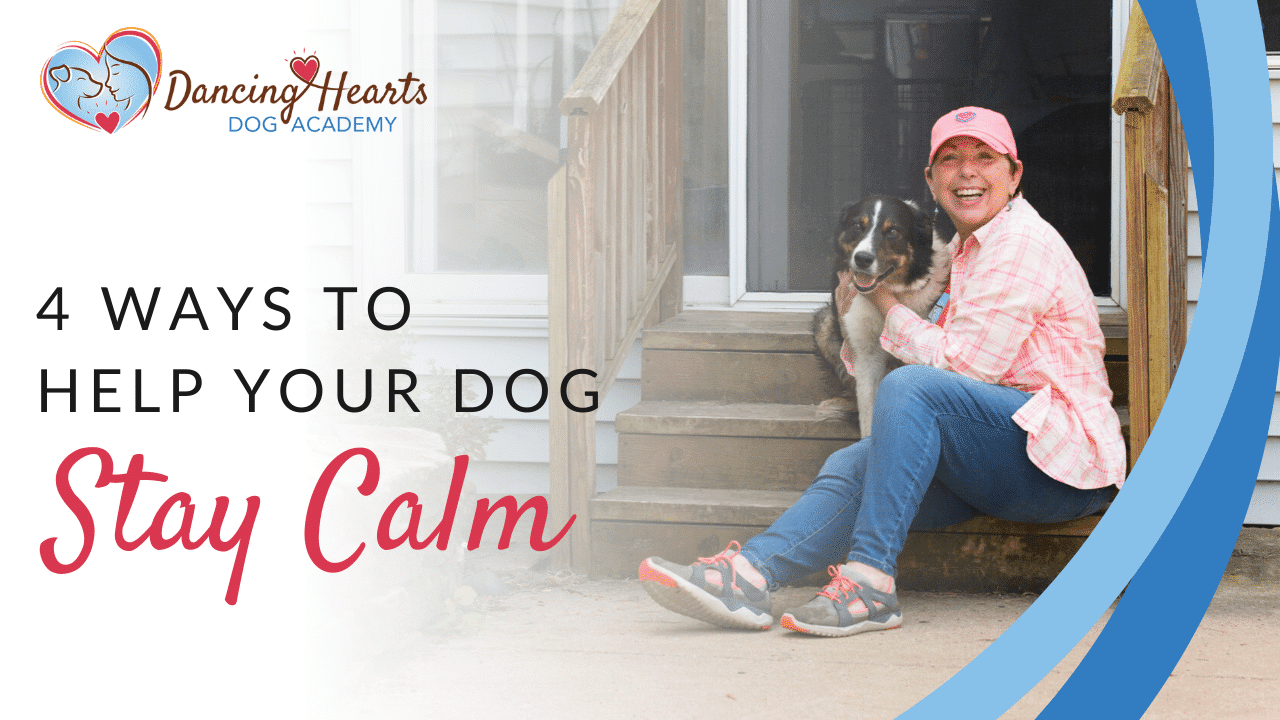 Are things a little crazy around your home right now?

During the summer months, many of us start remodeling, landscaping, gardening, or doing construction work on our homes.

This can cause many dogs to become reactive to the new activities and environment around them. Lots of new noises, people, smells, and a disruption to their routine can make even the calmest dogs antsy. Many may bark more than usual or become a bit over-excited or stressed during this time.

If you’re struggling to help your dog stay calm, keep reading. I share some simple tips that can help you restore peace around your home!

A few years ago, I was having some landscaping done around my house. It was a big project, so we hired a crew to help finish the job. But that meant a lot of noise and new people, which prompted me to record an episode about how my dogs handled it all.

It turns out that everything was fine, and it was a great example of responsible role modeling. The dogs were really great despite only going out in the morning and then not again until late after the crew had gone home.

What I didn’t do was make a big fuss about all the noise and strangers around our home. The dogs look to me as a role model, so I just kept going as normal, showing them that there was nothing to worry about.

“When we role model for our dogs, we’re literally expressing with our thoughts, our emotions, our actions, that it’s no concern of ours.”

Dogs follow our behaviors, so we need to change them first

Another example of this was a few years before when my dog Dylan was a puppy. I started to realize that he was noticing things in the sky, like birds and planes. But this is something I do too. I love birds, and I didn’t realize how often I was looking at what’s in the sky.

Dylan was becoming a bit fixated on the sky, and I decided I didn’t want that to be a new habit, so I changed my own behavior. I made a commitment that I would stop looking at the sky and just ignore any sounds of helicopters or planes.

Eventually, he started looking up less and less until he stopped paying attention altogether. This was all within about a week. By changing my own behavior and habits, I signaled to Dylan that there’s nothing important going on in the sky.

This is what I mean by being a role model for our dogs. We’re literally saying, “That’s of no concern of ours. Let’s just carry on.”

By the time those workers came to work on the landscaping project, I could see the dogs getting a bit excited by their presence. I didn’t tell them off, though. Instead, I decided to get up from my desk, go to the kitchen and open the cookie jar.

Some of the dogs followed, and we played a little game and ignored the workers. By doing this, I was telling them that the workers and the noise were nothing to do with us. So they all learned to ignore it.

You and your dog need to have empty stress buckets. If your dog is living in a state of high arousal or chronic stress, your dog’s cortisol bucket is full. And so is your own, either because of the relationship with your dog or you’re stressed out because of other things.

In order for this to work effectively, you need to start with empty stress buckets. What this means is living a safe, calm, and happy lifestyle.

This starts with you and being attentive and responsive to ourselves and our dogs. What starts to happen is our dogs begin reciprocating and becoming attentive themselves. They see that attentiveness is part of your lifestyle, and it turns into a reciprocal loop. 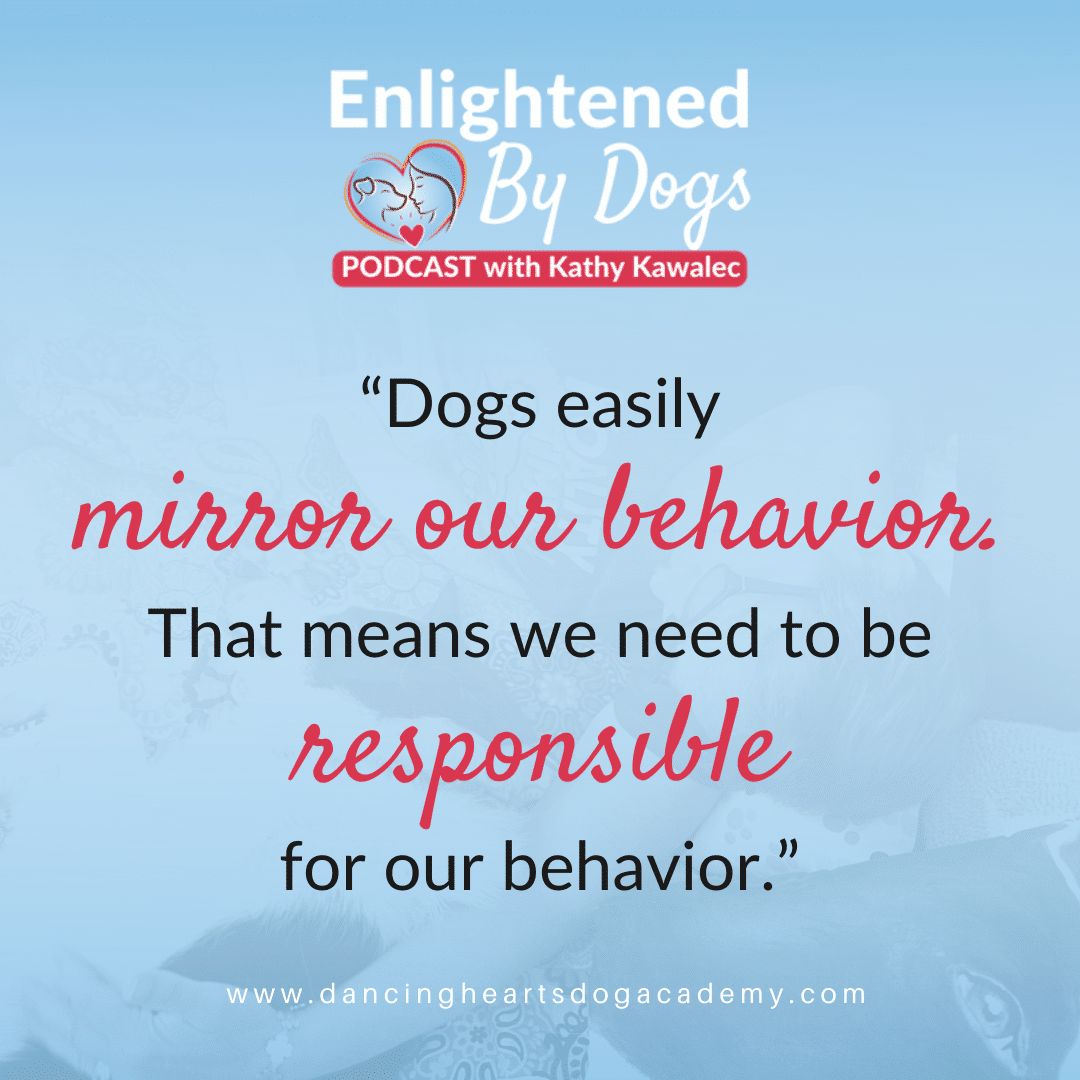 You’re also responsible for being a role model. If you want your dogs to follow your lead and mirror your behavior, which they’ll do by nature, you need to be a good role model. It starts with making that conscious choice and saying, “I am a role model.”

All good relationships and partnerships are based on trust. Our dogs trust us to be good role models, and they will follow our lead. That’s going to come from them.

We’re not going to elicit that or ask for it. They’re going to choose that for themselves, and so they get a lot of freedom.

By making these choices, it gives us so much freedom, and that’s key to responsible role modeling.

I believe that it’s definitely possible for you. I’d even go further and say it’s inevitable!

I’d love to hear how you implement these tips to make your partnership happier and based on trust and good role modeling!

I just have a quick announcement for you today.  A new video of

The Biggest Myth in Dog Training

Is training really the best solution for a misbehaving dog? Or, is it

How 3 Reactive Dogs Learned to Live in Harmony

Bettina’s life was turned upside down when they decided to adopt Murphy, a

Kathy Kawalec 28th September 2020
We use cookies to ensure that we give you the best experience on our website. If you continue to use this site we will assume that you are happy with it.Ok
Top