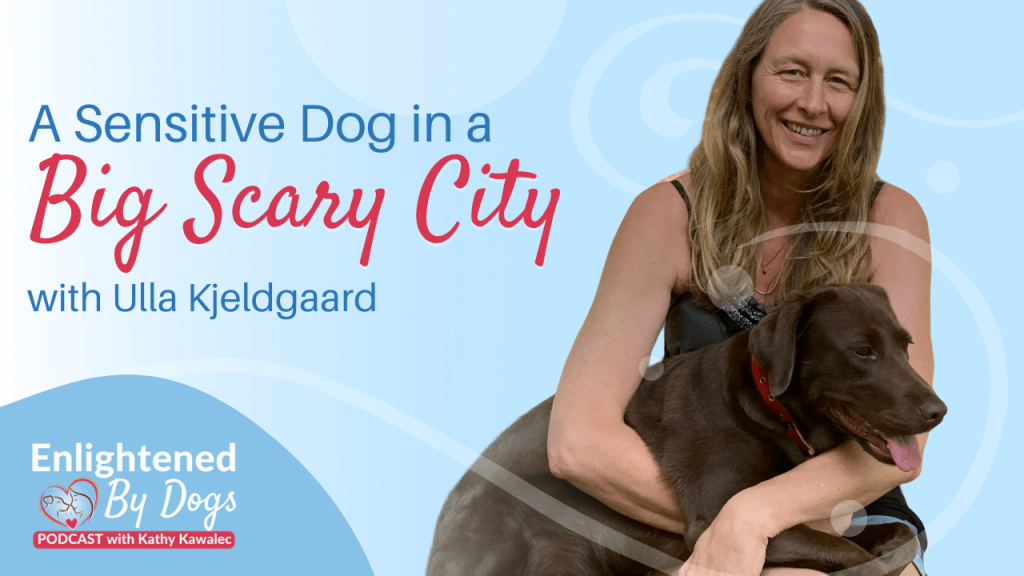 Having a sensitive dog in a huge city packed with racing cars, zooming bikes, large crowds, and lots of noise, can be super difficult. Some might even say it’s impossible.

However, I recently chatted with a like-minded individual who had this exact problem and was able to overcome it with her hypersensitive, nervous and fearful dog, Bella.

Ulla Kjeldgaard is an incredible dog mom from Portugal. She’s a member of my Brilliant Partners Academy and I’ve really gotten to know her and her dog over the last 10 months. Her story about her journey with her very sensitive and fearful Labrador, Bella is one that I know you’re going to love.

Many of you may have a sensitive dog of your own. If so, Ulla and Bella’s story will be so inspiring to you. It holds some valuable lessons that you can implement in your own day-to-day life with your dog.

So, let’s learn all about Ulla and Bella!

Getting to know Bella

Ulla is Danish and has lived in Lisbon for almost 14 years with her family. A very important member of her family is Bella, a loving but very sensitive Labrador.

What’s really interesting and unique about Ulla’s approach to training is that she brings her experience of energy work and therapy into her relationship with Bella.

When Ulla and her husband welcomed Bella into their family, it was immediately clear that Bella was a little uneasy. Not with her new owners, but with her surroundings. Bella came from a litter of adorable Labradors in the countryside.

Transitioning to city life in Lisbon was tough for her. She was afraid of everything and everyone. It didn’t help that the city is always swamped by tourists and large groups of people taking in the sights. Ulla was an experienced dog owner and had never seen a dog so fearful of seemingly “ordinary” things like buses, cyclists and pedestrians.

Ulla and her husband tried different tactics to try and condition Bella. So, they exposed her to the things she was most afraid of. However, nothing they did worked. Bella’s fears were not calmed down by the attempt to condition her to such things. Instead, her fears kept building and building until it was really hard for her to even be in the city.

We have to stop trying to fix our dogs

It was around this stage that Ulla joined the Brilliant Partners Academy. One of the first lessons she took onboard with Bella is that we need to stop trying to “fix” our dogs.

When Bella left the peaceful nature of the countryside and her littermates behind to venture into the big city, she was understandably confused. It was a huge transition for her to go from living a happy, content life to feeling pretty unstable in her new surroundings.

This uneasiness grew even worse considering Bella’s sensitive nature. While conditioning can be really useful and work well for some dogs, it can have the complete opposite effect for others. Unfortunately, this is what happened with Bella. All of the conditioning was making her even more anxious and nervous.

Ulla expressed her own struggles at this time:

“I had to walk with a dog that didn’t want to walk with me… I also had to deal with people’s judgments about why she was like that…and I couldn’t explain it because I didn’t know.”

After Ulla joined the program, things started to change for her and Bella’s relationship. She took key lessons from the “Safe, Calm, and Happy Protocol” that I teach inside the Brilliant Partners Academy whereby dog moms learn how to help their dogs feel safe, calm and happy. It’s a simple but powerful strategy that aims to help you and your dog live a happier life together. It requires a big mindset shift on your part as your dog’s leader, but once you’ve grasped the concept, magic starts to happen.

Slowly but surely, Bella began to feel more confident with Ulla by her side and their bond grew stronger with each passing day. Ulla talked about the incredible changes that Bella went through as a result of this shift in routine and Ulla’s mindset:

“When I started your program, I made a promise to her that I would never ever make her meet people that she didn’t like. And, I would stop taking her to places that she couldn’t handle. And just by making her that promise, she changed.”

Give your dog a choice

With traditional training methods such as conditioning, many dog owners feel like they have to force their dogs to face and overcome their fears. This is usually done by exposing the poor dog to the very things that trigger the stress, fear, or anxiety in hopes that the more they see and interact with those things, the better they’ll cope when they come across it again in the future.

However, Ulla took a different approach this time with Bella. She started to listen to her dog more and gave her the choice to say no to people and situations. Doing this really helped to ignite trust between Ulla and Bella.

Ulla began taking Bella out in the morning when it was quiet and other times of the day when the city wasn’t as loud or scary. It wasn’t easy but it helped Bella to begin to trust Ulla because Ulla respected Bella’s feelings about certain situations and didn’t try to change her mind about it.

Ulla was able to figure out ways to help Bella feel more relaxed in the big city environment. She became an advocate for her dog and one of the ways that she did this was by letting people know that she’d rather they didn’t touch Bella. Bella grew nervous when passing strangers wanted to pet her unexpectedly. So, by stopping this unwanted interaction from happening, Bella felt more comfortable on her daily walks.

However, there were times when Bella did want to be petted. In those situations, Ulla would let Bella choose who she liked instead of letting any random passer-by stop to touch her whether she wanted them to or not. 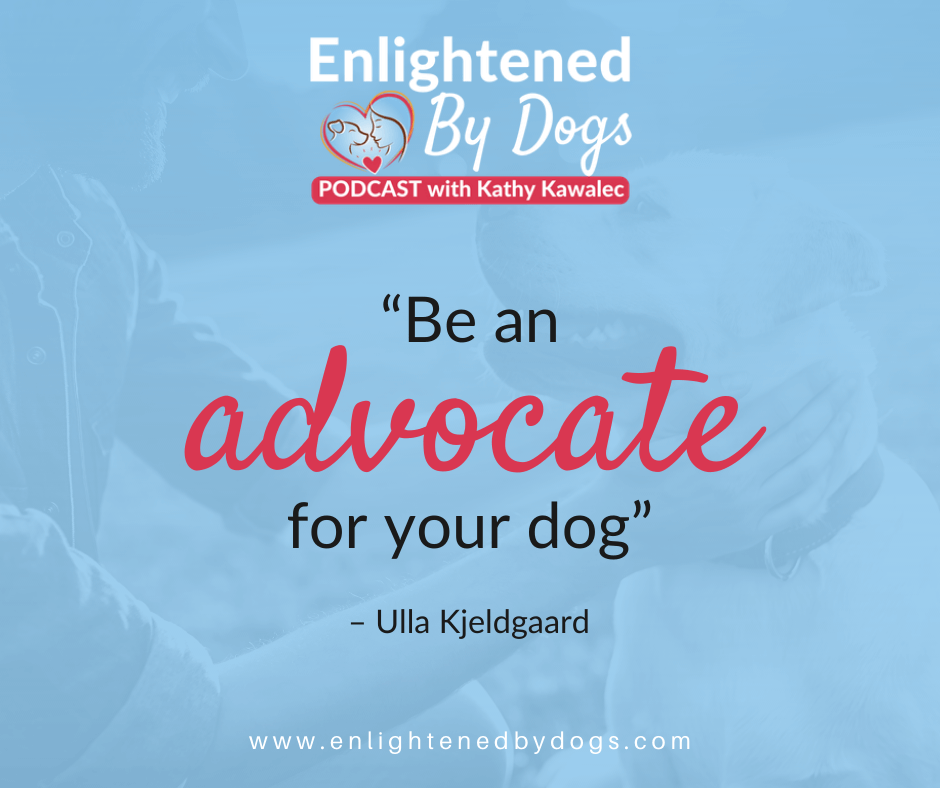 Be a role model for your dog

Another key principle I teach inside of the Brilliant Partners Academy is how to be a good role model for your dog. Your dog looks to you for guidance and will often mimic your behavior in some ways.

Ulla shared a great example of this with Bella. Bella was a little fearful of the noises in their apartment building. So, Ulla sat on the stairs with her and they listened to all of the noises together. She petted her and showed Bella that there was nothing to be afraid of.

When they were together walking in the city and a flock of tourists approached, Ulla calmly directed Bella the other way. While they were out, Ulla would be attentive without being alert. She observed Bella in different situations and honored her needs.

“I was just being attentive without being alert”

Ulla realized that she and her dog could do things separately, especially since her dog is more of a daydreamer, whereas Ulla is a go-getter. She wants to get to where she’s going fast. So, finding the balance and making sure that both Bella’s and Ulla’s own needs are met is really important.

Ulla has a lot of experience helping people become more balanced through energy and therapy work. She began to use some of the same tactics she uses with people, with Bella… and, it worked.

Like people, dogs need their own personal space or as Ulla likes to call it, they need to have their own “golden bubble.” Ulla needed to expand Bella’s golden bubble so that she would feel more comfortable in open spaces or when other people, dogs, and so on were near her.

It was almost like creating a protective bubble around Bella. Both of them could fit inside the bubble and once she started doing this, Bella started to relax and trust Ulla a lot more. Ulla took Bella beyond the city and they visited the countryside, beaches, and parks where Bella could run around and get the freedom she doesn’t always get in the city.

How to make a sensitive dog feel safe, happy and confident

Ulla uses the leash as a communication tool between her and Bella. Dogs can sense if you’re nervous or fearful about a situation, which can make them feel the same way. But, when you’re calm, your dog picks up on it and when you let them inside your bubble, they’re more likely to feel safe and happy in your company.

Ulla shared some of the most important lessons she took away from her experience with Bella so far. Here are a few of the key takeaways:

If you’d like to work with me and learn how to create a partnership lifestyle for you and your dog, you can request an invitation to join us in the Brilliant Partners Academy when the doors open for the next enrolment!

Watch a short video trailer of the episode below:

Why Your Dog “Forgets” their Training During Walks

Walking your dog around the house or garden is one thing. Transitioning those

How Connection Can Help Your Over-Aroused Dog

If you have an over-aroused dog, you’ll be no stranger to emotional outbursts.

Teaching dogs can and should be FUN! Most of us have dogs that