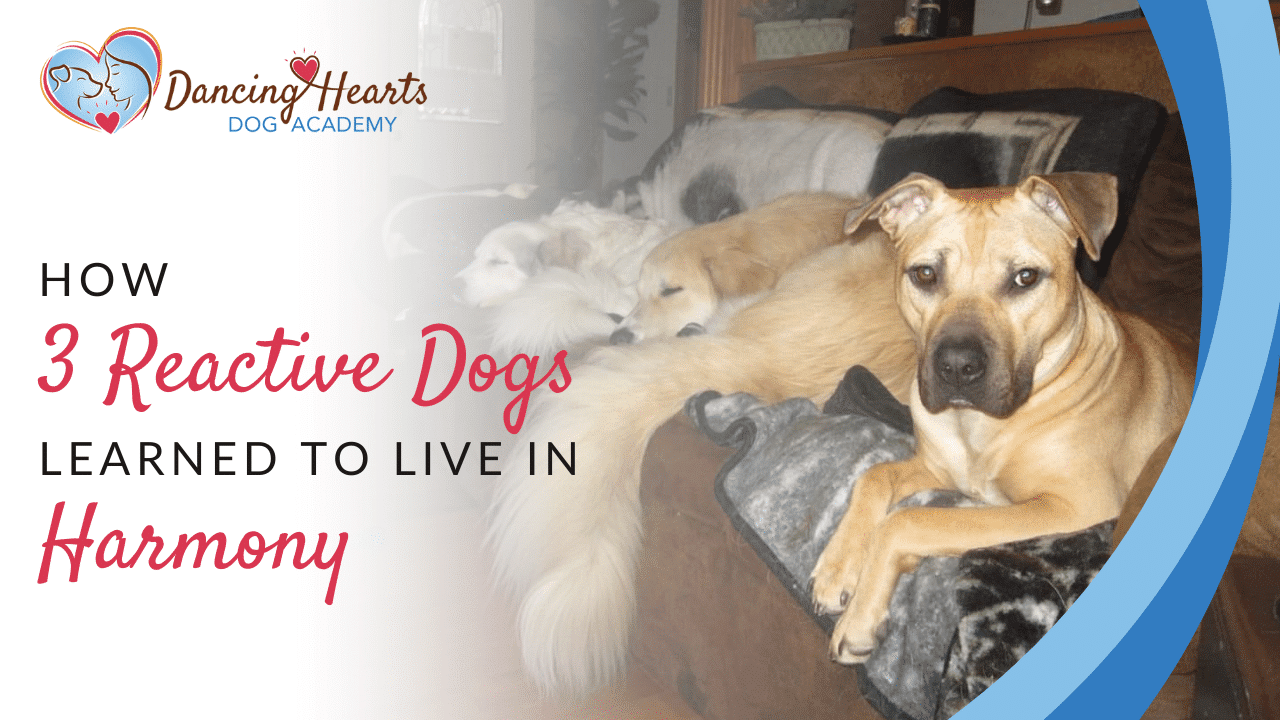 Bettina’s life was turned upside down when they decided to adopt Murphy, a deaf dog with OCD, after seeing his handsome face on a rescue website. It quickly became apparent that Murphy had a LOT more going on than a hearing impairment…

“We adopted Murphy knowing his deafness meant special needs, but quickly his OCD behaviors that included tearing out drywall and resource guarding turned our life upside down.

Soon it was not only affecting us, but our other dogs too. Bear started reacting to moving cars and bikes and Mary was stressed and showing signs of growing anxiety. Then Bear and Murphy started fighting, so we had to keep them separated.

We couldn’t go for walks anymore and car rides to quiet places didn’t work either because the dogs were crazy in the car now. I felt trapped and ready to rehome Murphy to get our lives back.

Then I saw Kathy’s BPA video and I thought ‘I’ve tried everything – training classes, private behavior sessions, reactive dog classes … I have nothing to lose’. 10 months later, I could take Bear and Mary in the car again, and we can go out for walks. All three dogs could be together in the house again.

I stopped trying to fix Murphy and we have a great partnership now. He turned into a real snuggle bug and we are helping him live life to the fullest.”

Now…well, let’s just say that ‘brilliant partnership’ is the current way of life for Bettina and her entire family! But how did all of this happen? And, how did the Brilliant Partners Academy help restore peace and harmony to Bettina’s family?

Keep reading to hear the full story from Bettina’s perspective!

Adopting Murphy and giving him a loving home

Before Murphy joined the family, Bettina already had two other dogs – a Great Pyrenees named Bear and her second dog, Mary. The pair were a match made in heaven. The family went on walks together, drove in the same car, went out for ice cream and they never encountered any problems.

Bettina happened to casually find herself looking at her local rescue dog center website. There, she spotted a picture of a handsome dog named Murphy. He was deaf, but that didn’t stop Bettina from calling up and enquiring about Murphy. She learned that he was in a foster home in Alabama, so she called the foster dog mom and they talked about Murphy.

Bettina learned that Murphy was deaf but healthy otherwise. He loved other dogs and he loved to play with them. He was then moved to a foster home closer to Bettina, who also happened to be the same foster mom who had Mary and Bear. She told Bettina that she thought Murphy would be a great fit for her family and so, she agreed to take him.

At first, everything went quite well. He was destructive with toys and blankets and tended to bark a lot, but all in all, he was doing great. However, during the Fourth of July weekend, they took the dogs out and let them swim in a lake at the park. When they got home, Murphy took a long nap and when he woke up, everything changed.

Murphy woke up from his nap and started spinning, running up and down the hallway, and ripping the drywall apart. Bettina had no idea what was going on or what had caused this sudden change in Murphy’s behavior.

“We tried to calm him down. Nothing was calming him down, he was on top of our fireplace mantel. He was on top of the table, he was ripping everything down. He was trying to jump out the window, he was just out of control. We did not know what to do.”

After calling the vet, they discovered that Murphy was shadow chasing and had OCD. The vet recommended that they medicate him and get in touch with a behavioral specialist. Although Bettina did not want to medicate Murphy, she felt like she was left with no other choice.

Unfortunately, nothing seemed to help Murphy’s behavioral issues. He barked at them and the barks soon turned into growls. The behavioral specialist took one look at Murphy and after just 10 minutes, she told Bettina to return him.

Bettina sent Murphy to a training facility and signed him up to reactive dog class lessons and private training lessons too. They visited him every other weekend and were hopeful that the training would help.

Murphy’s unruly and reactive behavior started to have an impact on Bettina’s other two dogs. The three dogs couldn’t walk together and they wouldn’t even get into the same car.

Bear started to bark all night, every night. All of the dogs became more reactive with cars, bikes and they would pull on the leash.

One day while the family was baking cookies, Bear and Murphy got into a huge fight. They had to be broken apart and kept separate going forward. This added to the stress felt by everyone in the household, including the dogs! The fights continued until it all seemed rather hopeless.

“I felt guilty and we had a lot of complaints, our neighbors were complaining, you know, the dogs were barking all the time. Murphy had to be crated, which I didn’t want to have to do, what life is that? We couldn’t take him anywhere. We couldn’t even take him to the vet.” 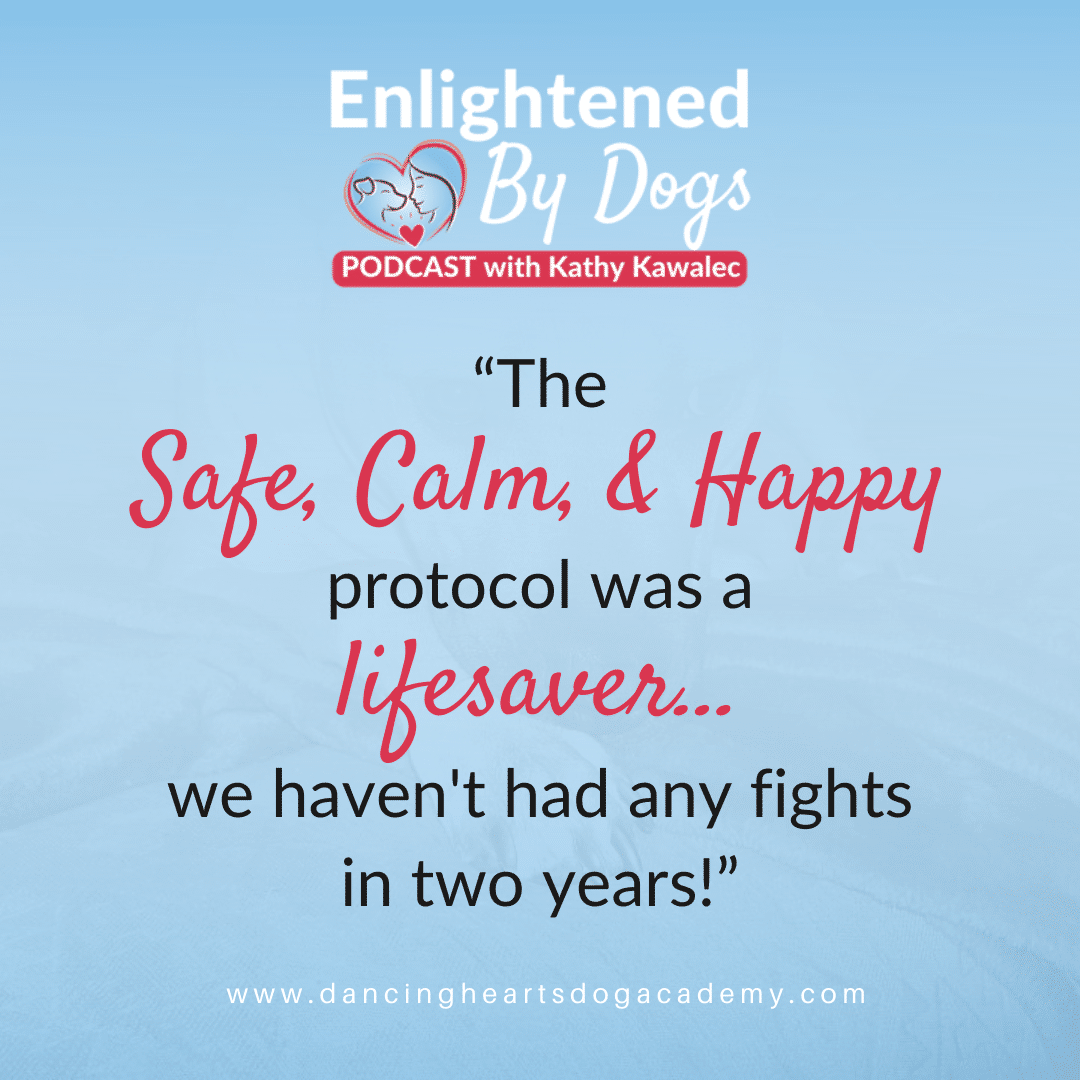 Joining BPA and following the Safe, Calm and Happy Protocol

Finally, Bettina found her way to the BPA. At this point, the family had really rock bottom. Since Murphy was shadow chasing, they kept all of the curtains in the house closed. They disconnected their doorbell and tried to limit as many triggers as possible.

Bettina joined the workshop at first and began to follow the Safe, Calm, and Happy Protocol. It wasn’t long before they began to notice some big changes in Murphy:

“Within a few weeks, we noticed a huge change and they were back outside together, and the resource guarding was almost gone. They were calmer and the barking was getting better… slowly but surely things were moving along.”

Murphy and Bettina’s relationship grew stronger too, which helped Murphy to learn to trust her. It was clear that he had finally started to feel safe, calm, and happy.

“His quality of life is great. He no longer needs to be in the crate. He spends about two hours a day in the crate total and that’s his nap time. Some days when his anxieties higher, I give him a little bit more. But other than that, he is on the couch. He’s playing outside. The thing with him is you have to take it day by day and you have to really pay attention to what his needs are because it’s different all the time.”

Murphy is no longer taking any medication and while he may not be perfect, he is doing miles better than before. The best part is that there have been no dog fights in two years, which is fantastic news.

Murphy’s shadow chasing obsession has got a lot better too. He used to chase shadows up to 10 times a day but now, it happens about once a week and there has been a huge shift.

Bettina puts a lot of their success down to the Safe, Calm and Happy Protocol and meditation. Bear and Mary are doing so much better too. Bear and Murphy do not fight anymore, and Bear understands that Murphy is a part of their family now.

“The beauty about the partnership lifestyle is that it’s not just for our dogs, it’s also for us. I use this in my everyday life with my day-care children, with my family, with our dogs, with my friends, I use it for everything.”

“Now only are we all enjoying our Brilliant Partners lifestyle, but recently we had cable construction workers in the neighborhood, even working inside of our yard.

The neighbor who was upset and complaining about our crazy barking dogs last year came out and asked me why he hasn’t heard my dogs barking at all?

I’m so proud of my three fur kids! BPA has been such a great experience for all of us and the support group is great. I am forever grateful.”

This brave dog mom refused to give up on Murphy, even though he was more than a handful!

Bettina has a big heart and is devoted to living a partnership lifestyle with her dogs and is an active ambassador in our BPA community…helping new members every way she can.

If you would love to have a similar transformation and learn how to create a partnership lifestyle for you and your dog, you can request an invitation to join us in the Brilliant Partners Academy when the doors open for the next enrolment!

How to Avoid Frustration with Unwanted Behavior

How to Deal with Leash Reactivity

Is your dog reactive on the leash? Maybe your dog hates being on

Step Into Your Dog’s Paws

Kathy Kawalec 18th May 2020
We use cookies to ensure that we give you the best experience on our website. If you continue to use this site we will assume that you are happy with it.Ok
Top