Sue is a professional dog trainer, so she has a lot of experience dealing with and training difficult dogs. However, nothing could have prepared her for the battle that Charlie would bring to her and her family.

Sue rescued Charlie and it wasn’t long before she suspected that he was very different from other dogs she met in the past. He had a problem with cars. He didn’t like being in them and he didn’t like being around them. He was so petrified of traffic that whenever he saw a car, he would lie flat on the ground. This fear derived from past trauma Charlie had endured when he was hit by a truck before being brought to the rescue center.

Sue was very understanding and didn’t want to push Charlie into situations that made him feel unsafe or uncomfortable. However, she also knew that they couldn’t avoid traffic forever. So, she coaxed him with treats to get him moving. It seemed to work but once he got onto the sidewalk, he pulled on the leash to find somewhere to hide.

They tried to avoid traffic by walking in the countryside. But Charlie became obsessed with chasing small animals like rabbits, squirrels, and even sheep. He became completely disconnected on the walks and would pull Sue through anything and everything. As you can imagine, this was a very stressful experience for Sue, who wanted to give Charlie a loving home:

“I used to come home in tears every day. Me, covered in mud, and not knowing what to do. Obviously, we did try. We tried to take him on our weekend activities with us, our walks, our hikes and our visits to other towns… it was a disaster.”

Although Charlie struggled on their walks together, he was a star pupil in obedience training. He listened to commands very well but once he stepped foot out into the real world, nothing worked. Well, not nothing. Charlie was rather fond of his ball and Sue used it as a tool whenever he wanted to chase something

“I turned him into a ball junky and the ball went everywhere with us and became my go-to tool the moment he was disconnected.”

Sue and Charlie’s relationship came to a head one fine day while the two were out for a quiet walk in the countryside. Charlie was on a long leash when suddenly he darted to a small stone wall. He set his two front paws on top of the wall and sniffed the air.

Neither Sue nor Charlie knew that on the other side of the small stone wall was a six-foot drop. Suddenly, Charlie leaped over the wall and tumbled the whole way down.

Thankfully, Charlie wasn’t injured. After falling, he shot back up and ran off to chase a flock of sheep. Panicked, Sue climbed down the six-foot drop after him, afraid he would get shot by an angry farmer. When she finally caught him, she couldn’t figure out how to get him out of the field. So, she grabbed him and in a moment of superhuman strength, managed to lift him over the giant wall and threw him into the car.

Sue was distraught and felt like giving up on Charlie, telling him on the way home, “You’re going back to the rescue center. You’ve ruined my life. You’re ruining my family. I can’t do this anymore.” 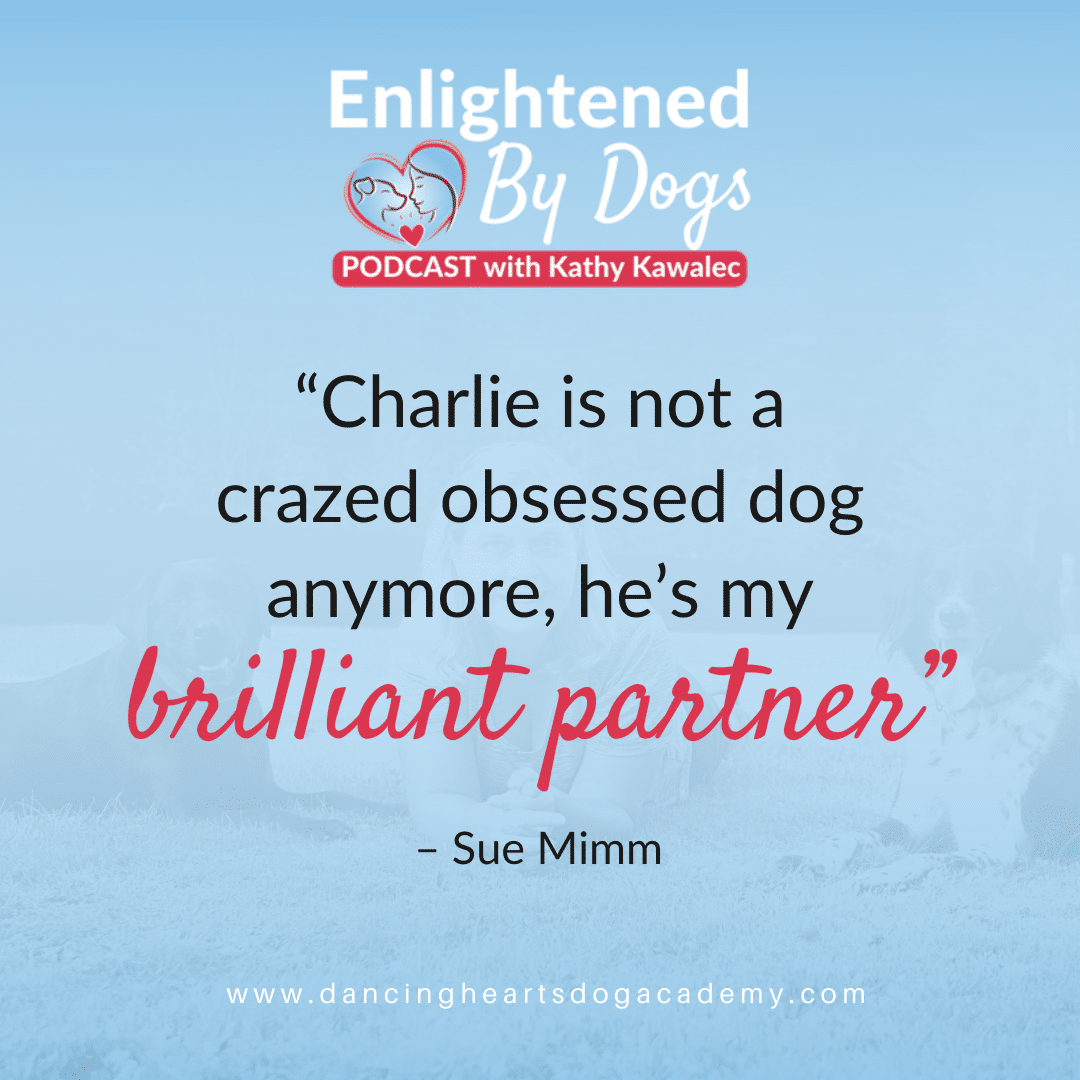 Why Sue decided not to give up on Charlie

When they returned home from the walk, Sue went through the papers and searched for the rescue center’s telephone number. She found it and she found the promise statement she had made to Charlie when she picked him up from the center.

“It just broke my heart and I just started crying. I was on the kitchen floor and he came over to me and put his head in my chest as if he was saying, ‘I’m sorry,’ and I said I’m so sorry too and that was the day that I made the vow. It didn’t matter what happened, I would find a way to help him.”

In a last effort to turn things around, Sue joined the Brilliant Partners Academy and that’s when things really started to change for Sue and Charlie. Charlie did so well, and their bond grew to the point where Charlie could join the family for a three-week trip around Scotland.

Obviously, things didn’t happen overnight. It took a lot of work with a focus on the Safe, Calm, and Happy Protocol I teach inside BPA. She gradually got him to be less obsessed with balls. They still play with balls together, but he became less transfixed by them and other moving objects.

“We would do things together, and the ball was there, but it wasn’t the focus anymore.”

Some other things that Sue did to help make Charlie feel safe, calm, and happy, was driving him 10 minutes from their home to go for an enjoyable walk. People close to her couldn’t understand why she would go through all of that trouble to walk her dog, but she didn’t care. She knew that it was worth it because they walked together in a quiet area with very few distractions, which helped them walk together in harmony and build their connection.

Walking your dog shouldn’t be an ‘excuse for exercising’ your dog. It should be a bonding experience and if you spend the entire walk disconnected from your dog, you miss out on a great opportunity to build a partnership together.

Sue and Charlie even played games like the name game and hide and seek (both of which you can learn inside the BPA). They worked on the ‘Dance Invitation,’ which is an important part of the BPA because it helps to create a stronger connection between dog moms and their dogs.

Here’s what Sue had to say about her and Charlie’s experience with Brilliant Partners Academy:

“As a professional dog trainer, it wasn’t easy for me at first to take off my training hat. It was difficult to get out of the habit of trying to fix my dog’s behavior with training. But the more the partner partnership principles became part of our lifestyle, the more I saw a change in our relationship and in my dog’s behavior, for the better.”

“It moved from a transactional relationship to one based on heart connection, mutual understanding, trust and cooperation. Do I want a well-behaved dog? Yes. But do I need to have a well-trained dog to get that? No, I can get that through partnership.”

I hope you enjoyed hearing Sue and Charlie’s transformative story and found some of the tips and strategies that Sue shared really helpful.

If you’d love to join our community and get coached and learn the details of how you can implement and start to live a partnership lifestyle based on trust, love, and cooperation without obedience training, get on the waitlist!

You can request an invitation to join us in the Brilliant Partners Academy when the doors open for the next enrollment!

It all boils down to Communication. Unless you and your dog learn

How balanced are your partnership’s personality types?

Life can get pretty interesting when we mix personalities. I’ve talked before about

5 Tips to Have a Happier Life with Your Dog

I don’t know about you, but I’m ready to welcome some joy and