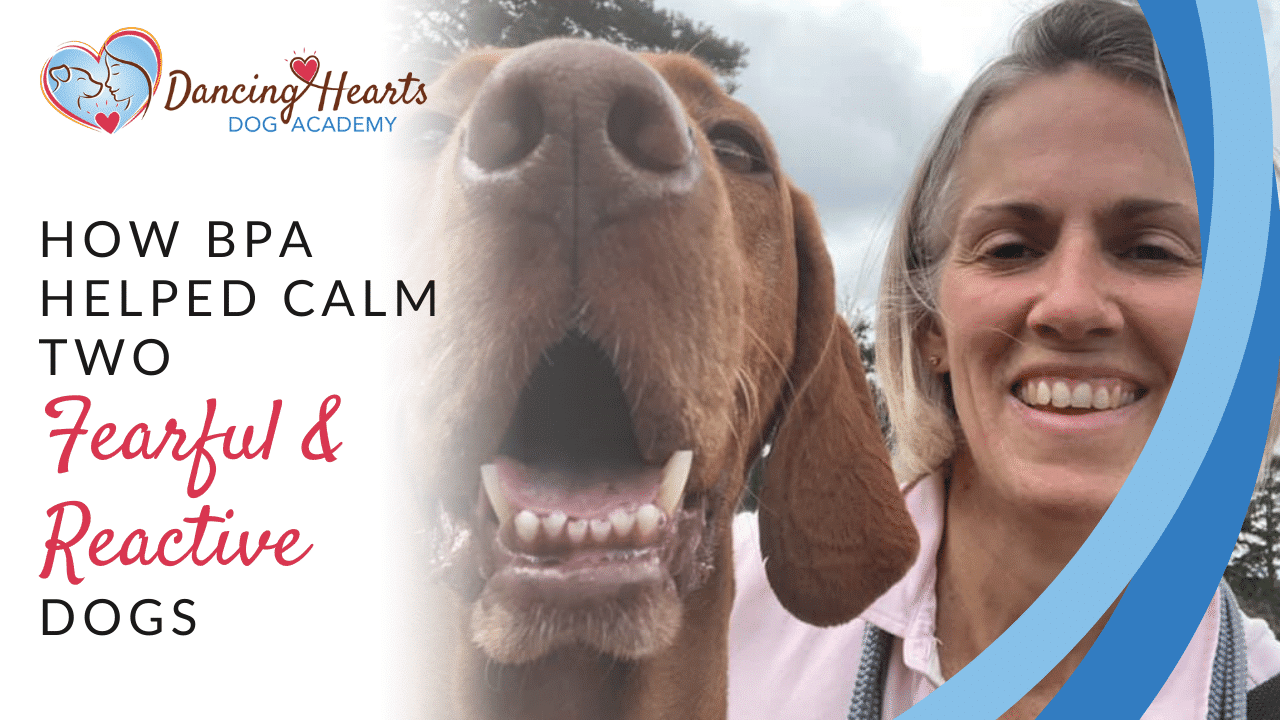 Ros adapted to life with her two beautiful but reactive Vizsla girls by avoiding encounters with other dogs and becoming hyper-vigilant. But this was not a sustainable way to live and Ros soon found herself filled with anxiety about the possibility that anything would suddenly appear.

People, dogs, cyclists, joggers, wildlife all caused panic, and the treat training around triggers did little to calm Ros or her dogs.

Taking a leap of faith in joining BPA, Ros went to work learning how to be a good role model, remain calm and to be present and connected with her dogs. Analyzing every choice through the Safe, Calm and Happy protocol became a way of life.

But don’t take my word for it! In this post, you’ll hear the full story from Ros herself and discover how joining BPA helped calm Phoebe and Myrtle, two adorable but reactive Vizslas!

Ros always dreamed of owning a Vizsla and admired the breed from afar for many years. In 2013, she finally welcomed her first Vizsla into her family and named her Phoebe. Ros quickly fell in love with Phoebe and devoted her entire life to her dog.

“I prioritized everything about my life around her. I felt that everything I was doing was what I should be doing to be the most fantastic dog mom.”

Everything was going well until Phoebe turned 14 months old. It was then that she started to be quite reactive to other dogs. Since she had just come into season for the first time, Ros assumed that her reactive behavior was due to that. However, things continued to get worse and it came to the point where Ros was ducking behind bushes with Phoebe whenever she saw another dog headed their way.

Ros tried classic reward-based training in an attempt to change Phoebe’s emotional response to other dogs. Each time a dog came into view, Ros gave Phoebe a treat. Of course, this method didn’t work very well whenever unplanned interactions took place. Both Ros and Phoebe became uncomfortable around other dogs.

Ros was interested in doing gundog work with Phoebe. She did it well at times, but she struggled with other elements. Ros put it down to her own lack of experience and the possibility that Phoebe wasn’t necessarily bred from ‘the right lines.’

After some time, Ros decided to get another dog, a second Vizsla named Myrtle. Before Ros got her, she expected Myrtle to be a confident gundog that would engage and work with her.

But…things didn’t turn out that way because poor Myrtle became a very nervous and fearful dog.

“She was very fearful from the very moment she came home. She was afraid of basically everything, so it took her a long time to get used to the family. Anytime I tried to introduce her to any dogs or puppies, she was afraid.”

Myrtle was even afraid of Phoebe to some degree, which made things difficult within the home. Myrtle’s fearful nature made everything a challenge and Ros found it very difficult to bond with her. 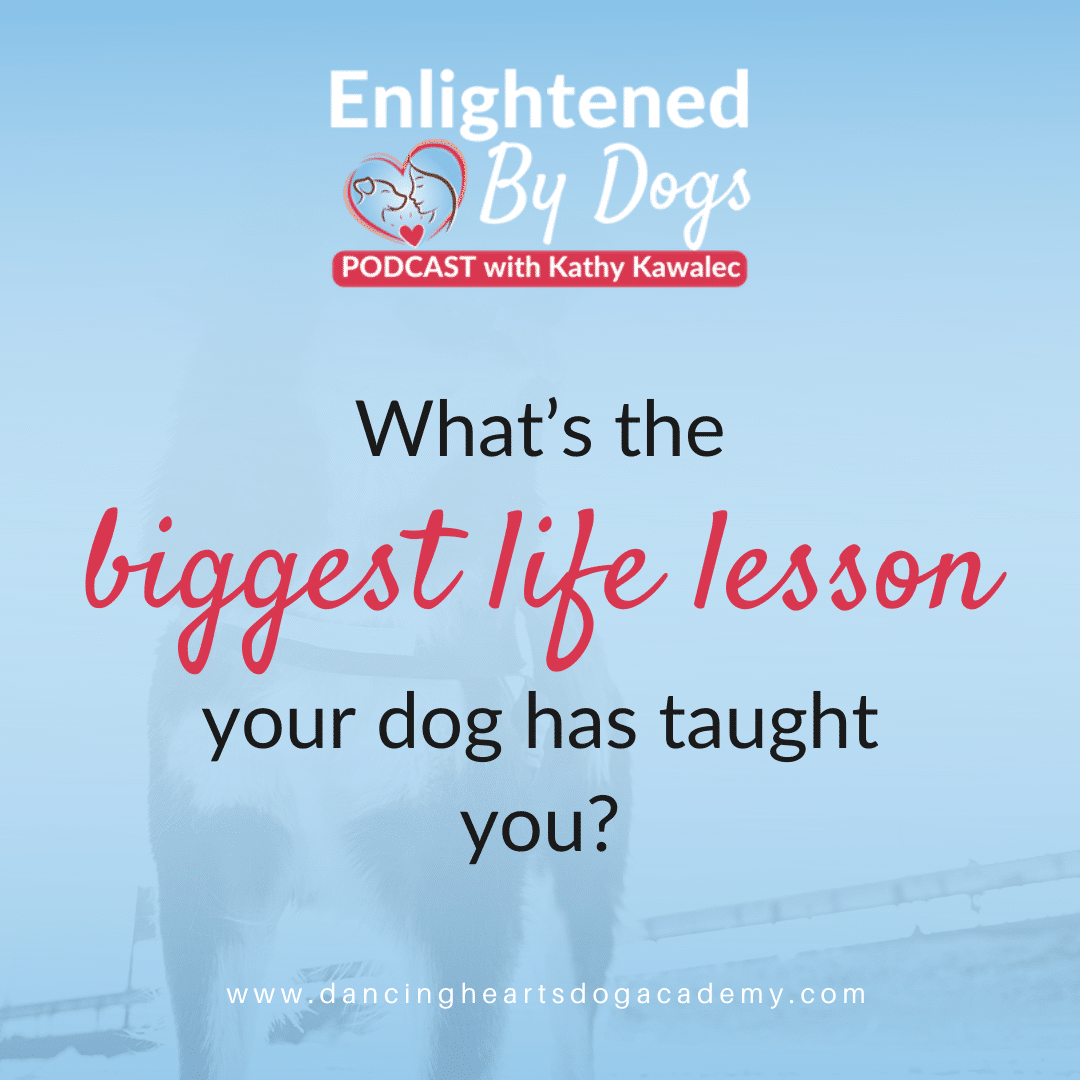 As you can imagine, life with two reactive dogs isn’t easy. Ros felt stressed and it wasn’t enjoyable to take the dogs outside.

“Every time I wanted to go out and walk them, it was awful. So, I decided about a year and a half before I found BPA, to only walk in places where the chances of me meeting anything that might trigger either one of the girls was minimal.”

Ros made the right decision to try and avoid triggers that would set either of her two dogs off. But she wasn’t sure if it was the right thing to do long-term. It definitely wasn’t a sustainable way to live as you never know what could be coming around the corner.

Ros became hyper-aware to the point where she couldn’t enjoy the walks with her dogs. She lived in a constant state of fear, which only added to her stress and anxiety.

“I would literally hide behind bushes and wait for people to pass and I’d have to be a long way away in case they might smell us. You know, everything was just very difficult.”

There was an incident when Phoebe chased after a jogger and actually bit him. Since then, Ros was very nervous to have her dogs around other people, both outside and inside the home. Both dogs became difficult whenever visitors came over, which made the situation pretty tense.

The Safe, Calm, and Happy protocol really spoke to Ros, who decided to join Brilliant Partners Academy to learn more about it following the free trial. Since joining, life has completely changed for Ros and her two dogs.

“Myrtle really blossomed and her relationship with me is completely different from how it was before. I really understand her now and I am not trying to fix her.”

Ros can go for walks with her two dogs and not worry that all hell will break loose as soon as they step foot on the driveway.

“We commonly get out and off we go regardless of who’s around and the same room we return. Whereas before I used to literally sit in the car and look about and think, could you hurry up and go because I want to get out!”

Ros doesn’t need to worry about other people anymore. They have learned to stay in their own little bubble and connect with each other during their daily walk. Instead of always looking ahead and being worried about who or what was coming, Ros focuses on her dogs and maintaining their connection.

They went from walking in places where there aren’t any triggers to places where there are triggers. Ros and her dogs are able to enjoy their walks without any agenda. She has learned to observe them and be present in the moment. This has helped Ros to develop her bond with both Phoebe and Myrtle.

BPA is a continuous learning experience

Something that Ros really admires about BPA is the fact that it is a learning experience and there’s always room for improvement. While Ros is constantly working on making her dogs feel safe, calm, and happy, she understands that there is room to keep getting better.

Ros also enjoys the support she gets from other members of the academy and being the one to give others advice too!

“The support that you get from the people in the group and the ideas that you get when you think you haven’t got any options is amazing.”

As I mentioned, Ros wasn’t sold straight away on the idea of joining BPA. Thankfully, all of her concerns and suspicions faded when she decided to join and embrace the partnership lifestyle with her dog.

“When I joined the BPA, I was really suspicious…the Facebook group is so different to anything that I’ve been used to because nobody was judging anyone.”

I’m so happy that Ros, Phoebe and Myrtle are doing so much better now, and their partnership connection is stronger than ever. Here are Ros’ final words on her experience inside the Brilliant Partners Academy:

“The progress we have made is beyond anything I had ever imagined possible really. We are all much more relaxed, we know how to really connect with each other and enjoy each other’s company.

We have clear boundaries, we celebrate when good choices are made, and we no longer chase wildlife, joggers or cyclists and we can walk where other dogs are and remain relaxed and connected with each other.”

If you’d like to work with me and learn how to create a partnership lifestyle for you and your dog, you can request an invitation to join us in the Brilliant Partners Academy when the doors open for the next enrolment!

I just have a quick announcement for you today.  A new video of

Digging Deeper into Communicating with Our Dogs

Wouldn’t it be amazing if your dog could talk to you? Well, they