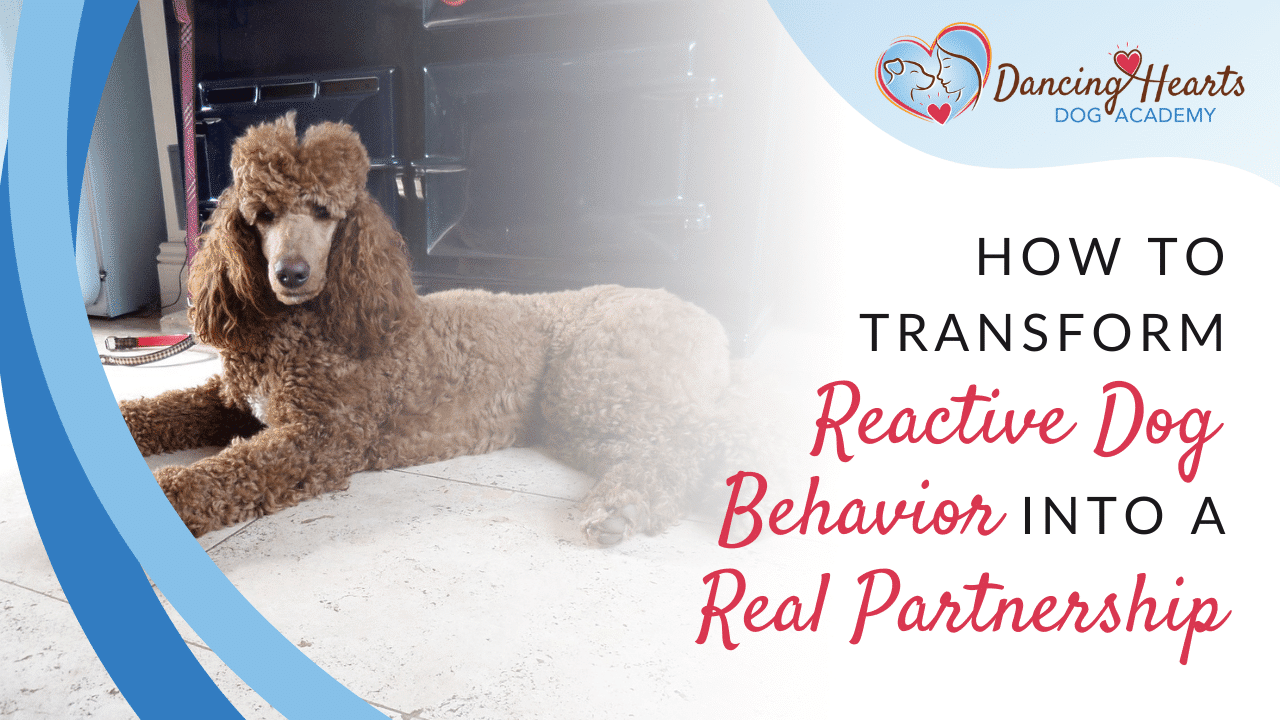 When it comes to reactive dog behavior, it can feel like you’ve tried just about everything, and nothing seems to work.

A reactive dog can put a huge strain on our relationships with our beloved pets. It can significantly impact the quality of a dog’s life as well as our own.

Traditional training is what many people turn to. But if that doesn’t work, what next?

The truth is, helping your dog isn’t about forcing them to act differently. It’s about opening your mind and looking at it from a different perspective.

Stella Murrell and her dog, Henna, came to the Brilliant Partners Academy (BPA) looking for a solution. Henna was a young dog with a series of physical and mental difficulties that were impacting her and Stella’s partnership.

After just 18 months, Stella is a fantastic success story for BPA. Their story is an inspiring one, which you can read about below.

Henna, a poodle, had a rough start in life after contracting meningitis. It turned what was a normal, happy, easy-going puppy into a reactive and unhappy dog.

Stella was desperate when she first joined BPA. She already had a dog called China, who she describes as the “ultimate Buddha dog” because he was just so calm. Then Henna came into their lives – a puppy full of life and energy.

However, Henna had clear issues right from the start in terms of physical health. She was permanently hungry and would scrape roadkill off the road to eat. Eventually, she was diagnosed with meningitis and had to undergo many invasive procedures with lots of anesthetics.

After overcoming meningitis, Henna still had health problems. She became very thin and ill, and this put a strain on her mental health. Henna’s issues began to manifest as extreme reactivity to other dogs and some people.

“She had the biggest prey drive I’d ever come across, and I’ve had hunting Sighthounds before. I’ve never seen a small dog hunt quite in that way. She bought down two deer!”

It was very clear that something was not working for the two of them. The wilder Henna became, the more anxious Stella did, creating an unhealthy cycle.

Stella then came across the Brilliant Partners Academy and joined the five-day challenge.

“I was so utterly blown away by the compassion shown that I just knew the BPA was right for us. From that point onwards, I was absolutely immersed in your program.”

Stella found that a different approach was needed. In particular, she was drawn to the idea of accepting Henna as she was rather than changing her.

“I’d been trying to turn her into another dog. I just couldn’t accept her. Once I did accept her, everything changed.”

Before then, Stella had tried traditional training but wasn’t fond of the approach they took.

“I was quite dismayed the first time I went to the trainer. She said, ‘You need to give this dog a very firm hand.’ That was the exact opposite of what was needed.”

The main challenges for Stella and Henna

One of the issues Stella had with Henna was when it came to grooming her. Anyone who has had a poodle before knows just how important grooming is. But Henna found grooming challenging and her fire-type personality meant that she expressed her discomfort by biting, snarling and growling.

“It was as if her nervous system was on the outside of her body. She had no covering over the nerve endings.”

Stella took her on typical dog walks, trying to give Henna more exercise and socialization. However, Henna struggled with over-arousal, especially around other dogs. Rather than calming her down, it had the opposite effect.

Stella felt stuck trying to figure out why Henna was behaving this way and what she could do. But there was hope on the horizon.

I remember when I first met Stella and Henna. One of the things Stella found difficult was stepping into her identity as a leader.

Stella was clear about not wanting to stifle Henna, correct her, or oppress her, which I love. But she was having trouble learning how to be a kind, loving leader. She felt like she had to be assertive and strong, but if she acted that way, there was the risk of diminishing Henna and dimming her light.

“What I was doing was putting us all at risk. By not stepping up and being the leader, everybody was at risk. Henna was at risk of being killed. Other animals were at risk, China was at risk, and I was at risk. And so something had to change. I had to keep us all safe.”

Stella struggled with Henna’s behavior for two years, but now, 18 months after joining the BPA, she’s a totally different dog.

“People stop me in the street and say, ‘Is that the same dog?’”

Henna still needs to stay on the lead at times and may become over-aroused. Now the difference is, it’s easier to calm her down.

“She’s still triggered by certain dogs. But we know how to handle it. I can bring her back down really, really quickly, and we can reconnect.”

Most walks are on the lead, which was a big change for Stella. She says that the program helped her see the lead as a tool of connection, not just a tool of restriction.

“Now we’re just so connected through the lead. That just brings joy to both of us. And I do let her off the for a good run sometimes.”

As grooming was one of Henna’s biggest issues, it took a lot of work to help her feel safe and happy enough to be groomed. Henna previously wouldn’t let anyone touch her legs because of her neurological sensitivity. Stella thought she was facing a permanent challenge here and that this was just who Henna was.

But the BPA taught her that what Henna needed most of all was support.

“I started to integrate support and consent into the grooming process. I would literally ask her if it was okay to pick up her paw. And just brush it very, very gently with my hands, first of all. Then I used a soft brush, and then I asked her if I could use a harder brush. We did that really, really, slowly.”

Now Henna allows Stella to groom her without snapping at her. It definitely helps when there’s peanut butter or coconut oil on hand!

This has been a big step forward in building solid trust between Stella and Henna. But the main change wasn’t in Henna. It was in Stella. In being present, asking for consent, and not rushing or being annoyed, they’ve both come a long way.

How Stella manages a partnership with two different dog personalities

Stella already had an established relationship with China which just continued. Now, they all work together as one family group.

“It’s like just one unit, one energy, just all working together.”

Both dogs have different needs, and this can be a challenge in any household. After learning more about Henna’s behavior and understanding her needs, Stella says working together as one group feels more organic than ever before.

The biggest gift you can give your dog

Stella and Henna are a great success story. Their lives look so different now, and I’m so happy to see such positive changes in The Brilliant Partners Academy community.

I asked Stella to share any words of advice for other dog moms out there who are struggling. She said: 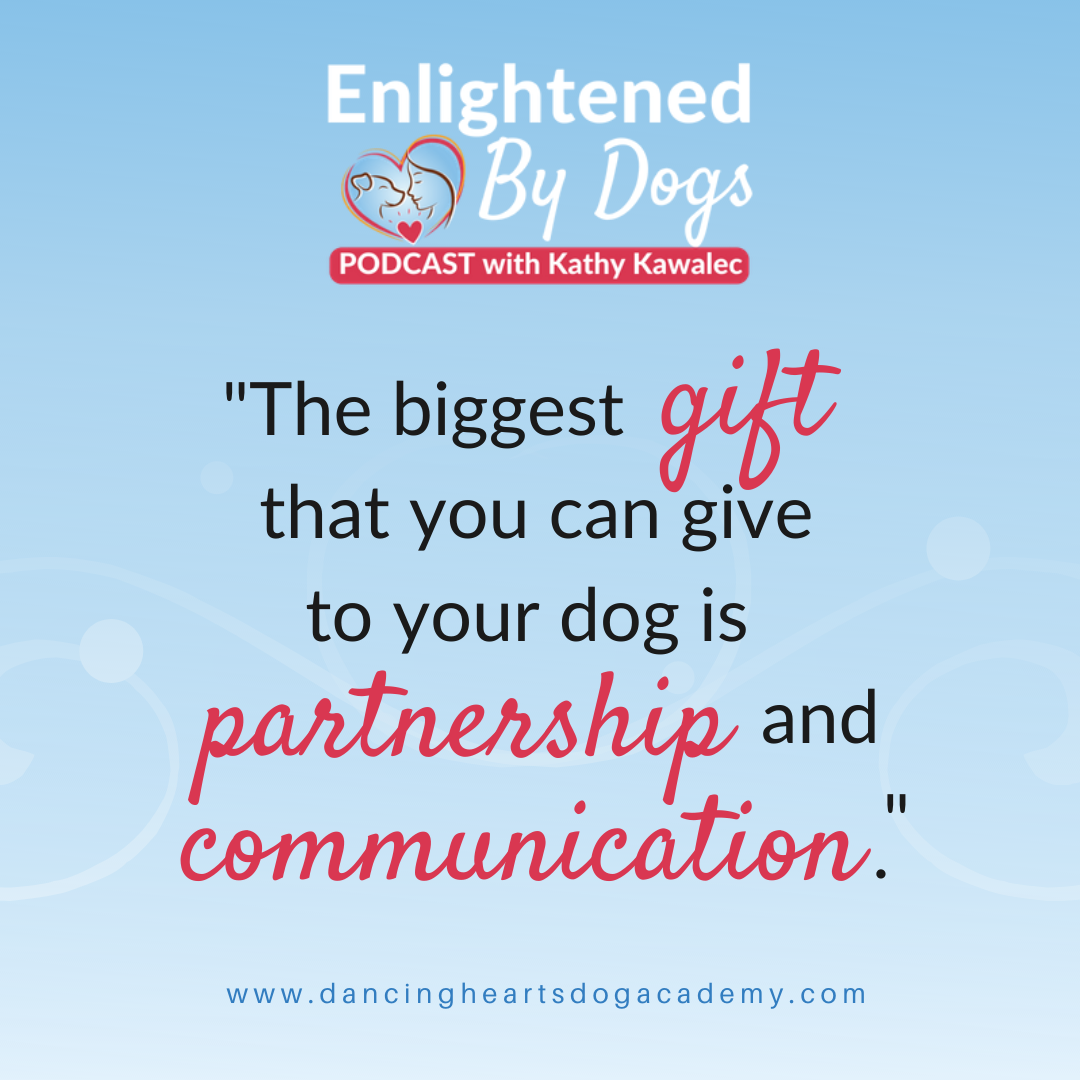 When your dog is “behaving badly”, it’s so easy to let yourself get

Are You the Real Cause of Your Dogs Lack of Focus?

How balanced are your partnership’s personality types?

Life can get pretty interesting when we mix personalities. I’ve talked before about