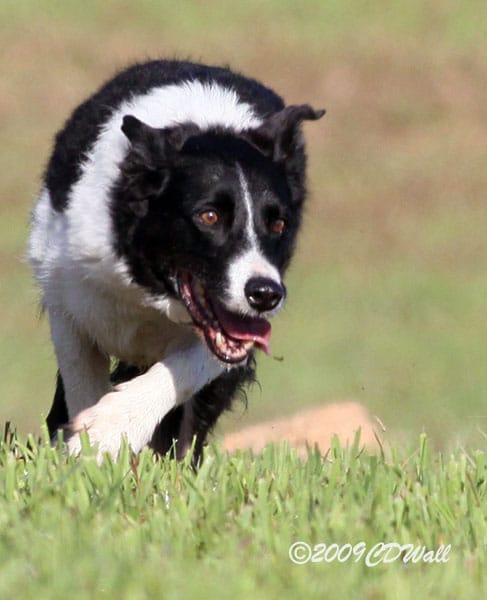 It’s taken me a week to find the heart to write this post. I want to share our story. I hope that I can make it to the ending. I guess I should just start with the end:

He’s gone. My heart is broken.

My Russell is now on the other side of the veil. Strong and brave…full of heart right to his last day. He didn’t want to leave me, even though it was so painful to stay. Finally, he told me he’d had enough, and I assured him that I would be OK. He relaxed, sighed, and we shared our last 20 minutes intimately sharing breath and exchanging love and support as I laid beside him on the fuzzy blanket covering the floor.

He had a sweet tooth, you know. Dr M came into the room to check on us, and shared their little secret. Russell hadn’t eaten much in those last days, but when she offered him some raspberry chocolate, he perked up, ate the pieces she offered in her hand and he wanted more. His expression was incredulous, she said. Like: wow, I didn’t know chocolate tasted THAT good. That’s my Bubba…loved those sweets. I smile when I think that his last bit of food was chocolate. Somehow, it eases my pain. Just a little bit.

At nearly 14, this time the dreaded cancer got the best of him. But, really, how can I lament? These last 4 years are like a giant, joyous bonus. At 10, he had two different surgeries to remove malignant tumors. I figured he would be retired. But not my Russell. He came back stronger than ever, his big heart leading the way to a full recovery. He wasn’t ready to quit just yet. He still had more work to do. More trials to win. Another Finals to compete in. And so he did.

Ah, those days of glory

I was proud to stand at the post with my good dog. Honored to be his partner. Humbled by his talent and his heart. At 12.5, he was the oldest dog competing at the 2009 Finals…and on that first morning when good dogs were retired because the sheep wouldn’t come down the field, I gave the old man his head and just let him bring them down on his own. The fetch was off line, but straight as he took charge of those ewes and smartly drove them around the course, finishing his run with an exciting pen. Not good enough to get thru, but on the top 40 leader board for 2.5 days.

I may have imagined it, but I felt a sense of pride from Russell as we talked about his two kids, Luc and Sue, who ran in the nursery at those finals. Just a bit over 2 years old, but they were coming on well and proving themselves capable of carrying on a line of good working dogs. No biscuit eaters, these.

The photo at the top of the page was taken at his last trial. October, 2009 at Jan Thompson’s in the beautiful foothills of Tennessee — what a great trial to have as our last competition together. Did Denise Wall somehow know what a special dog he was? Did she somehow know that it was his last trial? I don’t know…but she took the most beautiful photographs of Russell that weekend. Extraordinary. She captured everything special about him. She gave me a gift that is truly priceless. Thank you Denise.

Love at First Sight evolves into A Match Made in Heaven

I think back to the first time that I saw Russell at a clinic with Bill Berhow – there was this compelling, stylish, handsome dog of Bill’s – the kind of dog you can hardly take your eyes off as they work and that you most definitely want to get to know better. I didn’t know then that a few years later he would be mine and that we would take this glorious ride together. I wouldn’t have believed it possible. I love hearing the Russell stories from Bill. One of my favorites is of Russell gathering up hundreds of ewes spread out over the vast Zamora hills, often taking nearly an hour to complete the difficult task…without a single command…and always trusted to bring in the entire flock harmlessly. After seeing those hills in person – all I can say is WOW.

So, yeah, Russell was a great trial dog for me…but what he did on the farm is just as impressive. There wasn’t a job he couldn’t handle. Easily. No drama. If I positively absolutely had to get a critical job done, Russell was the one. Like the day we chose to wean the lambs a few years ago…who knew it would be 105 in the shade. We had to take the cheviot ewes off their lambs and load them in the stock trailer without any fences or gates to help. We couldn’t mess around, it was too hot. Not a problem for Russ. When we had to move very reluctant cheviots thru a chute into a tilt table for their first time, I could trust Russell to keep the sheep pushed up to load the chute when I asked, and to just lay quietly in the pen until his help was needed.

Turning back sheep at a novice fun trial in a pasture too large for many of the young dogs to keep their sheep under control — there was Russell, keeping his cool, turning back panicked sheep being chased by an enthusiastic youngster with quiet authority, then quickly responding to a lie down, allowing the young dog to take the sheep back. Last year, when we were weaning some flightly lambs on another really hot day and had to get them loaded in the trailer, I got Russell. I knew no one would get hurt…that his calm, strong presence and keen moves would get those lambs loaded quickly, no fuss. He was 13+, and made the job look easy. And so it was. A dog to be relied upon.

I think back over our years of trialing, and the many times I was reminded of how lucky I was to be partnered with a dog like Russell…reminded by men and women who know good dogs. Whose life is centered around good dogs. They saw Russell for what he was, clearly being able to see past my (way) less than perfect handling. Big hats recommending Russell as a stud. Famous international judges seeking me out at trials to tell me what a great dog he was. One in particular who sent his representative to buy my two Russell puppies, sight unseen, after watching him run at the WWSDA Labor Day trial. (of course I said NO! 😉 )

Then there’s Russell’s legacy. His sons and daughters and their sons and daughters. Bobby Dalziel liked Russell’s daughter, LadyBird, so much after seeing her at a one of his clinics, that he leased her from Terry Pelkey so that he could breed her to his famous stud dogs. One of those pups, Guillaume Josien’s Bob, is representing France in the 2011 World Trial after coming in 3rd in the French Nationals at just 2 yrs old. Derek Scrimgeour liked my Russell daughter, Sue so much, he told me that he would consider her to be one of the great bitches, and that he would love to have her. Rob Miller has much trialing success with his Russell daughter, Jen, as well as with Russell’s grandson Rex…including coming in 1st and 2nd with them at the prestigious Lacamas double lift trial in 2008. Loren Holmes’ famous and successful Puzzle is a Russell daughter, and her daughter Razzle (Russell’s granddaughter) is the dog who sold for over $16k at the Red Bluff working dog sale in 2008. Then there’s the whole line of Southern California cattle ranch and cattle trial dogs of which Russell is the foundation sire.

So many memories…so much that I learned from this great dog. I guess that makes me a legacy of Russell’s too. My life is forever changed because he touched my heart and brought his wisdom into my life. I have so much more to learn. But the lessons I’ve applied are amazing, really. Every dog that I touch in some way is getting the benefit of what Russell taught me since he’s been my teacher. I can barely remember what I was like then. Before Russell, I mean. Definitely less of a person. Less of a handler. Less of a trainer. His pups now have the big task of carrying that torch. And their biggest task is teaching me, of that I’m certain.

Thank you for letting me tell my story. I feel better for sharing. I guess now I’m circling back around to Heart. My broken heart in particular. My dear friend Nancy sent me a beautiful message to help ease my grief after Russell and I said our goodbyes. I’d like to share that message, and I hope that it will ease pain in other hearts that are broken.

So the heart. It is perfect in it’s broken state. A heart can’t contain or collect Love or Blessings or Joy or Beauty. These things can be poured into the heart but not held, not in a contained way. The spillage is a sharing of all those lovely things, with anyone who is lucky enough to catch the drips, the spatter and the overflow. The cracks and fissures in a broken heart are meant to relieve the pain of both Love and Grief, a pain that is so dense, so great that it would dissolve the heart if there were no escape route. These Sad and Lovely things leave their imprint behind and flow off to bring joy and sorrow to another heart. The perfection of the broken heart is quite impossible to understand – unless you use your heart.

The term ‘sweet sorrow’ comes to mind. What a glorious ride we had. The sorrow comes only as a result of the joy that came first. I wouldn’t trade a minute of it.

Goodbye, my good friend and partner.

I’ll see you on the other side one day. And in the meantime, I’ll try to be the kind of person you always reflected back to me in your beautiful and adoring eyes. 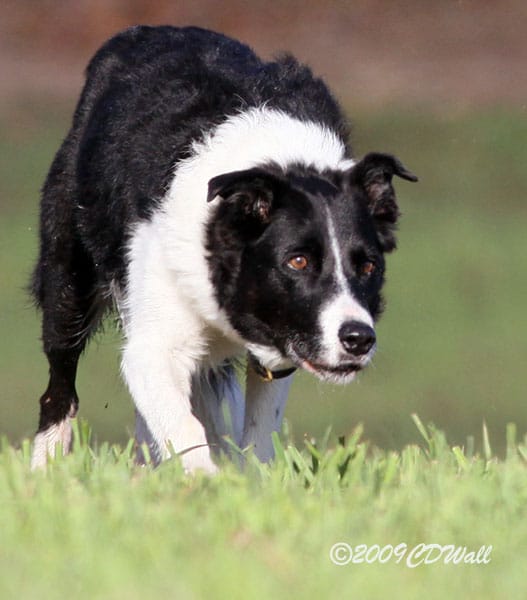 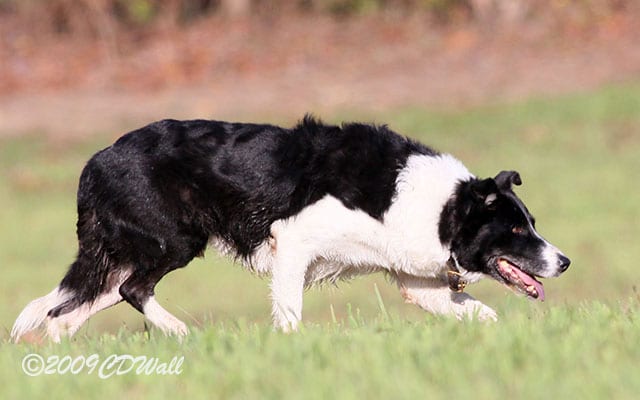 Learning from Experience. Why is it that we can’t just “download” the instruction

A Sensitive Dog in a Big Scary City with Ulla Kjeldgaard

Having a sensitive dog in a huge city packed with racing cars, zooming

How to Avoid Frustration with Unwanted Behavior

Kathy Kawalec 17th April 2020
We use cookies to ensure that we give you the best experience on our website. If you continue to use this site we will assume that you are happy with it.Ok
Top