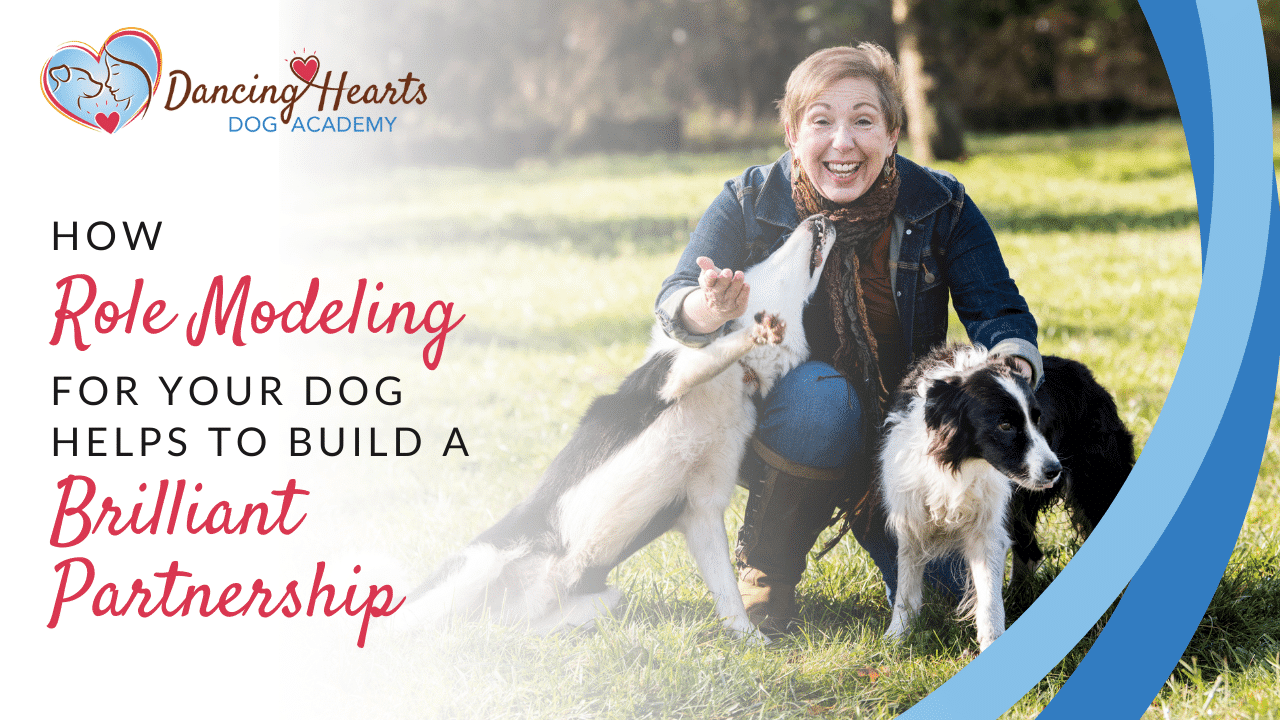 Living in partnership with our dogs comes with lots of highs and lows. We create memories together that we cherish, and we continue to grow closer as brilliant partners. However, it’s not all rainbows and sunshine. Sometimes, our dogs like to express themselves in ways that some people would deem “naughty.”

This type of behavior ranges from barking at perceived dangers that we know are safe, trying to chase moving cars, or barking hysterically at airplanes and birds in the sky.

When our dogs behave like this, we know there is an underlying reason for it. Perhaps they bark at the delivery man because they want to protect the yard from strangers. Or, maybe they bark at birds in the sky because they want to scare off potential flying predators. Believe me when I say that dogs have their reasons for alert barking, car chasing, and howling at the sky!

However, as dog moms who strive to live in partnership with our dogs, we know that we can handle this behavior through role modeling as our dogs’ leading partners. So, let’s get into what that looks like and how it can help calm our dogs when they start barking at things that are of no threat!

What living in partnership really means

Living in partnership with our dogs takes time. It’s an ongoing process, and a lot of it can be experimental. After all, we’re individuals with thoughts, opinions, and choices – just like our dogs! Every day is different, and circumstances can change from one minute to the next.

Dogs are socially intelligent animals, and we can tap into their intelligence and their innate drive to look to the leader in their family group for directions on how to behave. Through role modeling, we can teach our dogs how to look to us for guidance, what to do in the moment, and how to behave when an unexpected trigger pops up.

“I think of living in partnership as an ongoing dialogue”

Meet your dog where they are

Sometimes, we just have to meet our dogs where they are, and I have a great story to share about this topic. This story comes from a member of BPA, who experienced some difficult times with her dogs. She and her dogs have since come out on the other side of all this drama happier, stronger, and with a deeply connected bond.

So, this particular guardian dog is called Bear, and he kept barking in the middle of the night. He was concerned about the noises he heard outside, and barking was his way of scaring off potential danger. He was just doing what came naturally to him as a guardian dog, but of course, this meant that he kept the entire family awake in the process.

Bear’s family came up with strategies to help him settle down at night, but nothing was really working. So, we experimented with focusing on satisfying his guardian instincts in a different way.

His dog mom took him out before bedtime and they walked the perimeter of their garden/yard. This gave Bear peace of mind knowing there was no danger lurking in the shadows that he needed to protect his family from. Then, as the family got ready for bedtime, Bear was reminded that his job for the rest of the night was to sleep peacefully, because the humans were now in charge of the guardian duties. He no longer needed to sound the alarm, unless there was a serious and imminent danger, like someone was trying to break into the house.

This strategy proved to be effective because Bear got to fulfill his natural instincts by patrolling the yard before bed. He was content knowing that his family was safe, and he began sleeping through the night – it was a huge success!

That’s just one story of how role modeling (the action of taking Bear around the perimeter of the garden) made him feel safe and content. 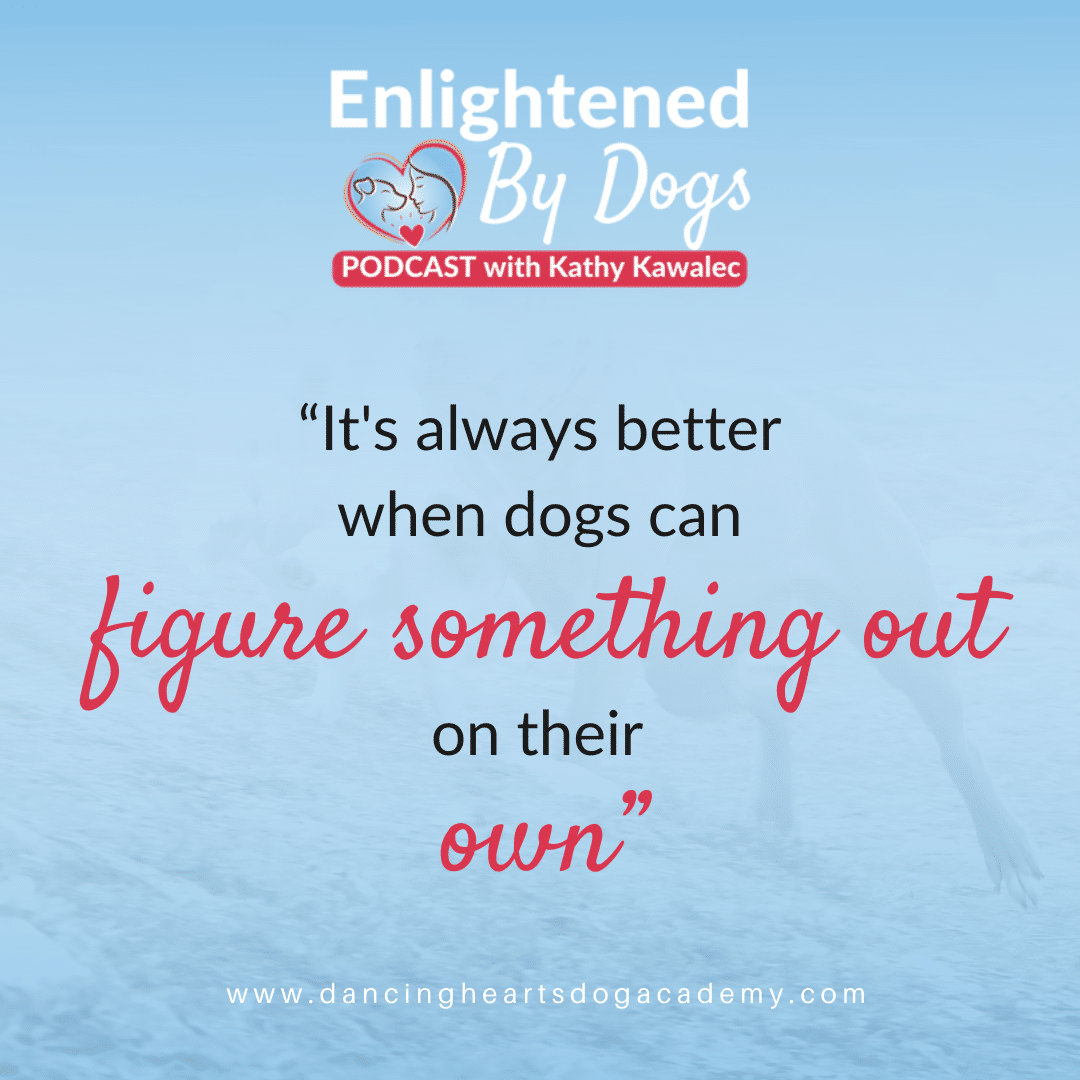 How to deal with alarm barking

The next story I’m going to share is about my own two young Border Collies, Dylan and Katie, who started alarm barking when we had workers at our house for some repairs.

When the workers showed up unexpectedly, my dogs could see them through the doors, and as you can imagine, they were surprised, and began to bark at the perceived intruders as loud as their little lungs would let them. My older dogs weren’t concerned much about the workers, so they were able to help me to role model how we handle this as a family.

On the first day when the workers unexpectedly arrived and the youngsters began alarm barking, I walked into the kitchen and began playing the Name Game with the big dogs.

As you probably guessed, the puppies soon wanted to be a part of the fun. I called out their names in my happy name-game-voice, and gave them a treat as a token of my love and appreciation. It was a great way to draw their attention away from the workers’ noise, and that allowed me to role model that the workers were no concern of ours.

I role modeled for the puppies that, as a family group, barking (or shouting) at the workers was not something we did. The puppies realized that the workers were of no concern to the other dogs in the house or to me. Therefore, they quickly learned that they shouldn’t be concerned either.

The second day resulted in only a couple of barks, then a quick settle with no cues/commands from me … I just continued my role modeling, showing them that I was not concerned.

By the third day, when the workers arrived for work, the puppies didn’t give even one bark, and after a quick Name Game, they just went off and had a nap in their favorite spots around the house. Success!!

How to deal with motion sensitivity

One of my young dogs was very motion-sensitive and would bark at things flying in the sky. This included everything from birds, airplanes, bubbles….you get the idea. As a Border Collie who is bred to work, being motion sensitive is pretty common. However, he wanted to chase things in the sky, which concerned me as it could lead him across fields and other faraway places.

Plus I knew from my client work that it could develop into an obsessive behavior quickly enough, and I wanted to prevent that from starting!

Shortly after Dylan began to look at things flying in the sky, I soon realized that every time I looked up at the sky, he would do the same. He wanted to know what I was looking at, and — oops — I realized I was role modeling for him to do the same thing.

So, I decided to consciously make an effort to stop looking at every bird and airplane that soared through the sky. I love watching the birds, so it wasn’t easy at first, but it stop my dog from looking at the sky too.

Within a week or so, my dog’s impulse to watch things in the sky wore off, and after a while I could once again watch my beloved birds, being mindful to only do so when Dylan was playing or otherwise occupied and not focused on me.

That was it! No training, no direct intervention at all, other than me modifying my own behavior as my dog’s role model.

I’ve learned over the years that it is always better when dogs can figure something out on their own. So, I always look for the best way to make that happen.

The key steps to the role modeling protocol

The Joy and Struggle of Life with Dogs

Learn how to get more joy and a lot less struggle with the 5 Steps to a Brilliant Partnership with the Dog You Love.

How Starting a Gratitude Practice Can Enhance Your Life

Partnership-Friendly Indoor Activities for You and Your Dog

Looking for some fun activities to keep your dog entertained at home? On

Kathy Kawalec 27th April 2020
We use cookies to ensure that we give you the best experience on our website. If you continue to use this site we will assume that you are happy with it.Ok
Top