Pretty much every dog mom I’ve ever spoken to has a story of their best friend’s unwanted barking. I’ve certainly got a few stories of my own!

This is a really tricky topic because we can’t expect our dogs to sit in silence. Dogs barking is just like humans talking – it’s natural and it’s the way we communicate.

But, just like some human chatter can get on our nerves, so can inappropriate or over-the-top barking.

So, what are the steps to getting on top of unwanted barking? What’s the cause of it? And is it possible to stop it after the habit has already formed?

I’m going to answer all of those questions in this article!

Understand why your dog barks

I mentioned it in my introduction, but it’s important to reiterate:

Dogs bark as a way of communicating.

We’re never going to have silent dogs, and we shouldn’t want them either! I love hearing my dogs talk to me and each other and we’re lucky that our best friends are so communicative and expressive.

“Dogs bark – that’s what they do – and we love that about them, it’s their way of expressing. Now that doesn’t mean that we have to love their crazy, over-the-top aroused and inappropriate barking.”

But not all barks are created equal and there are some situations where you really do not want your dog to be joining the conversation!

I think there are four distinct categories that explain why our dogs bark in situations we’d rather they didn’t:

Let’s take a bit of a closer look at each of those categories.

This is usually a nervous-type dog who is not filtering out noises or other activity in their life that a normal, balanced dog with established habits might usually just ignore.

These dogs can be hypersensitive to different triggers – it could be noise, movement, or certain actions or activities.

All dogs have some degree of prey drive. I mean, they’re dogs – that’s what they do! Prey driven dogs are especially sensitive to movement, as it triggers an innate desire and calling to pursue their prey.

Their primary motive is to hunt, to control, catch, and stop.

A dog with a herding drive is pretty similar to a prey driven dog. After all, herding is just an adapted, modified prey drive that has been trained over generations to eliminate the catch and kill part.

Herding dogs can and will still kill animals, of course, and be driven by their prey drive. Just as herding dogs can also be hypersensitive. If you’re thinking that your dog fits into several of these categories, it’s probably because they do!

Our dogs have our best interests at heart, but sometimes they can take it a step too far! What I like to call the self-employed sentinel (because we certainly aren’t asking them to do it!) is a dog who will be on high alert to every single animal, person, bike, bird, and gust of wind.

Their protective nature is one of the most lovely things about dogs, but if your dog thinks everything is dangerous and a threat, it stops being quite so enjoyable.

So what are the ways we can address inappropriate barking from dogs in any and all of these categories?

Stop barking from starting in the first place

Dogs are habit forming machines. I think that after one to three times of performing an action, a dog is already forming a habit. This is why it is so crucial that we set a good example and encourage desirable habits early on in our partnership.

Don’t worry, though, if you’ve been dealing with unwanted barking for years, there are plenty of ways we can address that too!

Some of the things you need to practice if you want to prevent unwanted barking from becoming a habit include:

“Avoid raising your voice because, from our dog’s perspective, that is barking. If we yell at them because they’re barking, it could very well be interpreted as agreement and encouragement.”

If your dog has an established habit of unwanted, over-the-top barking, we can manage that too! And it’s all through my eight step Bark Busting Protocol.

Let’s get into it… 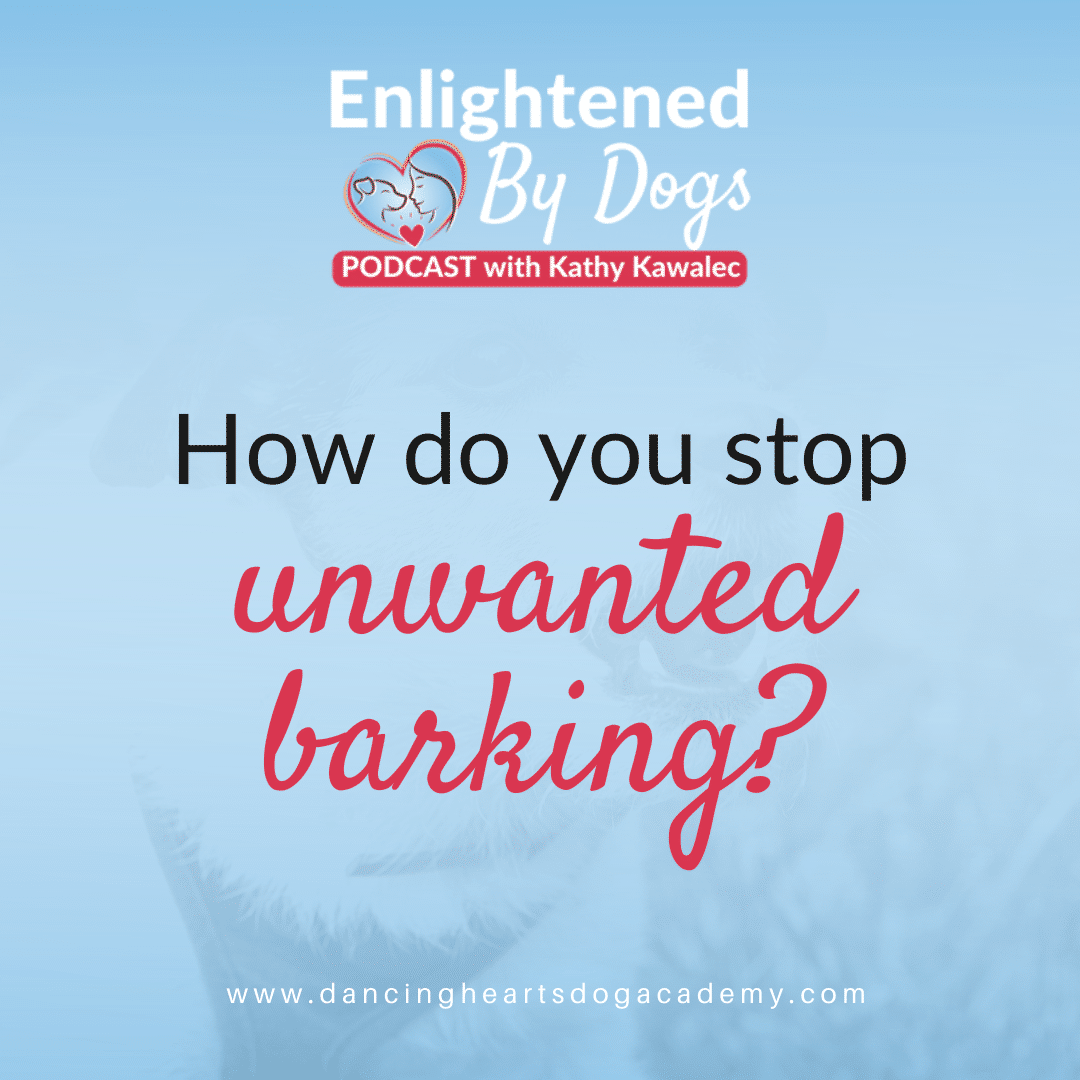 Dogs are habitual creatures, which some dog moms can be really worried about. If a dog forms a habit, that can be a really strong connection and behavior. But dogs love the process of having habits, not the content of the habit itself, so retraining and replacing unwanted habits with desirable ones is far easier and quicker than you might first think.

“In one to three times of doing something, we already have the start of a new habit forming.”

The eight steps of my Bark Busting Protocol will help you do just that.

Keep your dog away from things that trigger them! Put them inside if a trigger is outside, put them outside if the trigger is inside, put a baby gate up, do what you can to put some distance between your dog and their trigger.

Be aware of where you and your dog are and what you are doing. Is a trigger likely to occur? Does the mailman come by at a certain time every day? Is there a tree in the park where lots of squirrels are? Knowing where and when to expect your dogs unwanted barking is key to changing this habit.

If you can influence your dog’s choice to bark before they start, you’re going to make a lot of progress very quickly. Remember we talked about your influence and role modeling earlier? If you can interrupt their reaction to a trigger at the right time with a quiet, calming conversation or action, you’ll see great results.

4) Capture one quiet moment at a time

Success in changing an unwanted barking habit isn’t going to look like perfect new behavior the first time you try. It’s going to be made up of incremental progress. It’s so important that you capture and celebrate those small wins as you go along.

Right at the very beginning, before the triggers fires, reward your dog for being such an angel! Lots of love, pats, hugs, kind words, and praise for being such a good dog and staying silent. Don’t be afraid to lavish the love on your four-legged friend – they aren’t going to turn it down!

6) Repeat your reinforcement until the trigger event is over

Keep that love and attention going until the trigger event ends. If your trigger event takes a bit of time, you might want to make sure you’ve got enough treats and snuggling stamina prepared to go the distance!

Yay! You did it. The trigger occurred, your dog didn’t bark, and you’re going to take the time to celebrate it!

Keep repeating these steps until the new desirable habit replaces the unwanted one. You’ll be surprised at how quickly your dog will accomplish this.

Want a closer look at my Bark Busting Protocol?

If you’d love to get on top of your dog’s unwanted barking, you can get a more detailed training of my Bark Busting Protocol (including some examples of how I’ve put it into practice with my own dogs) in my Partnership Starter Kit 2.0.

It’s every dog mom’s dream guide to creating a closer bond and a happy life with their four-legged friend.

Watch a short video trailer of the episode below:

8 responses to “How to Stop Unwanted Barking in 8 Steps”

How can you train an “untrainable” dog? Do such dogs even exist? Many

Kathy Kawalec 24th May 2012
We use cookies to ensure that we give you the best experience on our website. If you continue to use this site we will assume that you are happy with it.Ok
Top