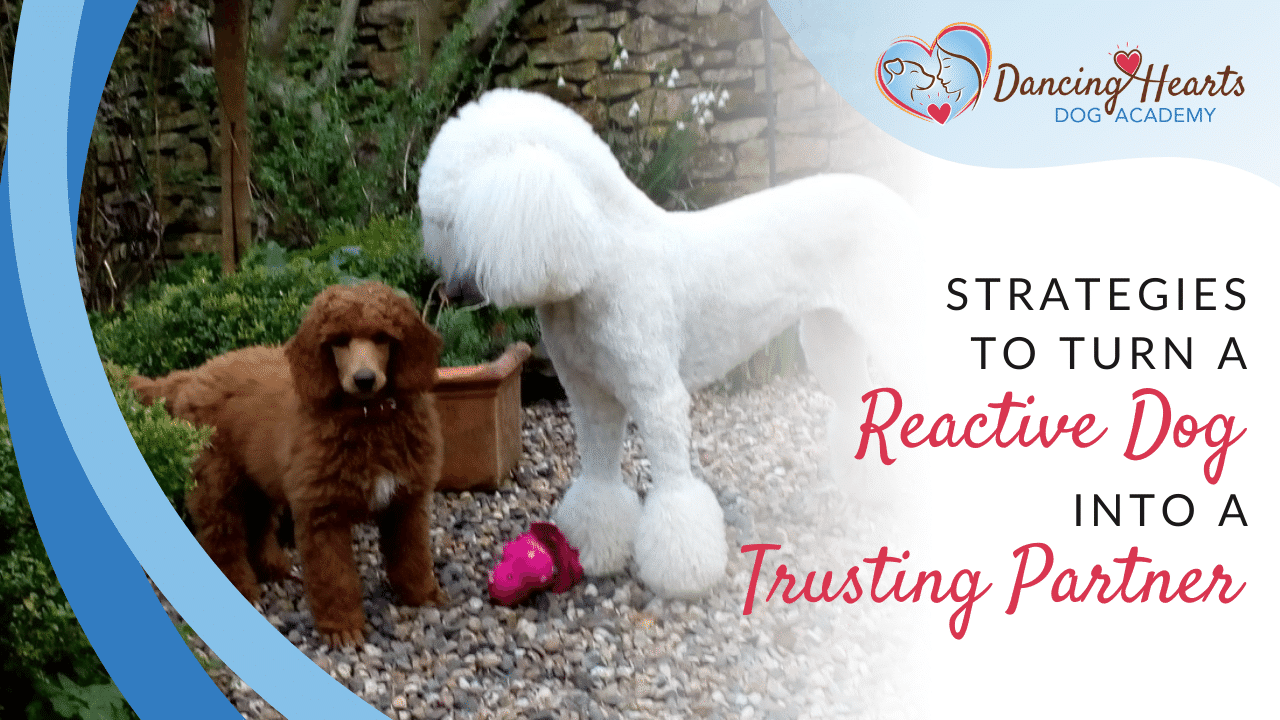 Stella’s wild child Henna was a special puppy who endured serious illness, affecting her brain and their relationship.

Henna’s lunging and barking at everything embarrassed Stella, who became stressed about the effect this out of control dog was having on the family.

Resonating with the BPA focus on heart, connection and understanding, Stella joined the BPA and soon began to really ‘hear’ Henna. She soon realized that it was fear and lack of trust that was the driver for the unruly behavior.

The Brilliant Partners Academy became their guiding light. When speaking about her time as a member of BPA, Stella said, “after just six months of being in BPA, our lives were transformed.” Stella and Henna have come a long way in a short space of time, proving that it doesn’t take an eternity to create a loving partnership connection with our dogs.

In this post, you’ll hear Stella and Henna’s story from ‘the dark days’ of Henna’s unruly behavior to nowadays, where she has become the light and joy of Stella’s life.

Henna, her behavior, and her health issues

When Stella welcomed Henna into her home, she completely turned their lives upside down… for all of the wrong reasons. As Stella put it, she was like an “electric cable without any covering on it.” Even the slightest touch would send Henna into a frenzy and it became clear to Stella that she would need a lot of care and love.

Stella admits that she came to Henna with a pretty big ego. She had experience as an animal communicator, holistic practitioner, and thought she knew a lot about how to train a dog. Of course, Henna proved her completely wrong and went against all of the things Stella thought she knew about dogs.

When Henna was six months old, it became apparent that she had some medical issues. She had meningitis and after a number of procedures, scans and blood tests, they discovered that Henna had an infection in her brain.

Henna’s poor health accounted for some of her behavior. Unfortunately, things only got worse for poor Henna and she developed a gut issue and lost a lot of weight. Although it was clear that her health affected her behavior, Stella knew that it was more than that.

Henna would be so hungry that she would pick up roadkill from the road and she didn’t care if there was traffic in the way, she would lunge for it and snatch it up. This is what Stella had to say when reflecting on this difficult time in their lives:

“Everything about her was high energy and driven, really, really driven. I tried to use meditation to understand what the issue was, but I didn’t get anywhere with it. It’s not until I came to BPA that I really began to get underneath what the issues with her actually were.”

Why Stella resonated with BPA

As an experienced holistic practitioner, Stella resonated with the principles followed inside the Brilliant Partners Academy (BPA).

She joined the free workshop and immediately felt like she had found the right help that she needed to bond with Henna.

Stella realized that she had been trying to fix Henna when that wasn’t what was needed. One of the biggest turning points for Stella was when she stopped trying to fix her and accepted her for who she is. Instead of fighting Henna’s wild energy day in and day out, she would try to tame it.

This meant that Stella had to start connecting with Henna on a deeper level. The heart connection between them was missing because Stella had been so caught up with Henna’s health that she forgot to tell her that she loved her. Making your dog feel loved is so important and sometimes it’s as simple as telling them so! 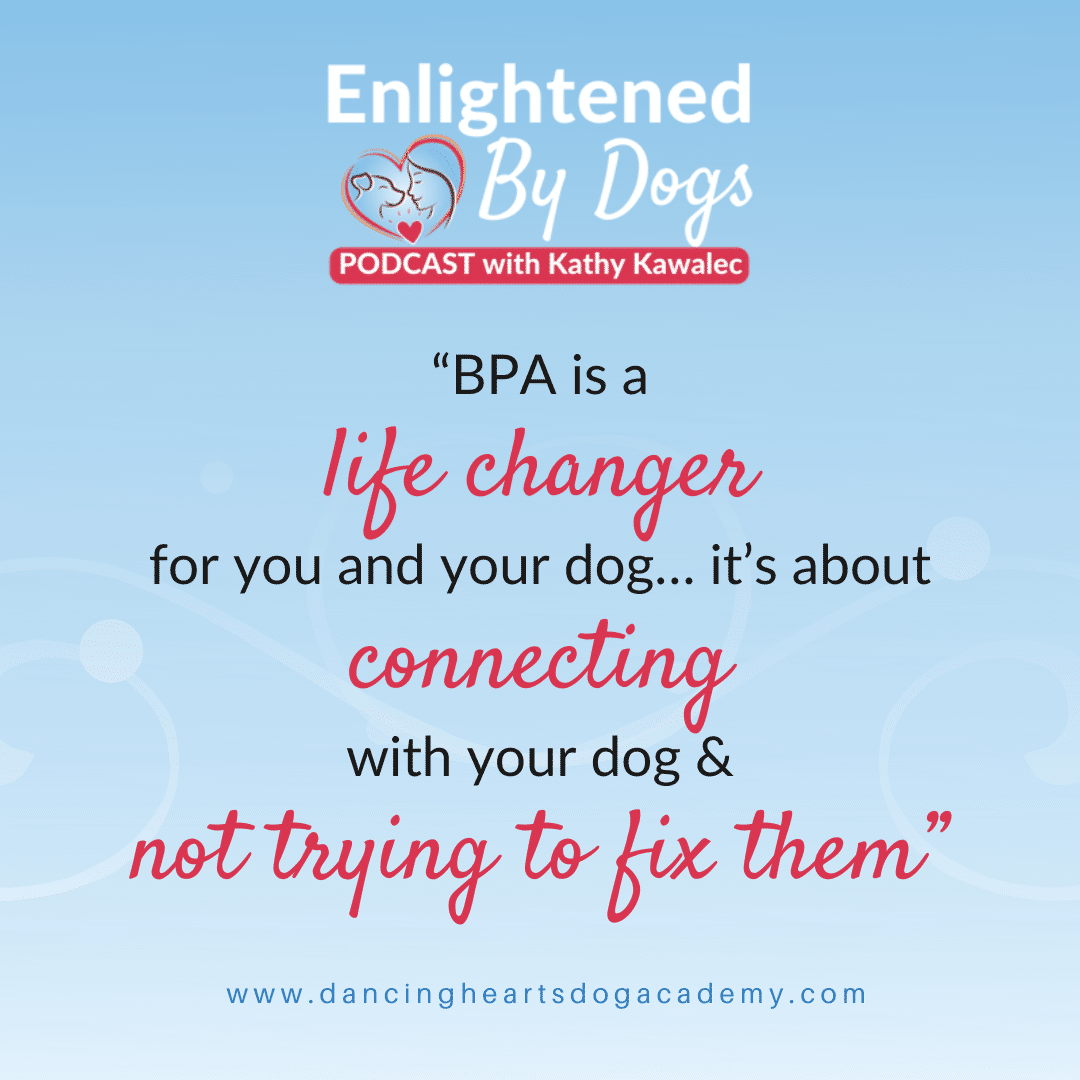 How Henna and Stella’s lives have changed

Before joining BPA, Henna would lunge and bark at everything. Sometimes she didn’t even need a reason, she would just start barking hysterically. But this changed once Stella started putting the BPA strategies and principles into action in her everyday life.

Now, Stella can walk with Henna while staying connected and present in the moment. One of the most effective strategies that have helped turn this reactive dog into a trusting partner is the arousal protocol we teach inside the BPA.

Stella learned how to diffuse Henna’s arousal so that she wasn’t so hyper and over-active all the time. Instead of letting Henna off the leash as soon as they started their walk, she kept her on it a little longer to build the connection between them. This helped Henna get into the habit of checking in on Stella instead of running off to be on her own like she often did. When Henna is off the leash, she comes back to Stella to check in on her.

Stella shared a heart-warming story that shows how far her relationship with Henna has come.

“When Henna was younger, you couldn’t even touch her. She would just freak out and you especially couldn’t touch her front legs at all. The other day we were walking and she suddenly stopped still, and I wondered what was wrong and she started limping on one of her front legs and so I said, ‘Okay, girl, come in, let me have a look and see what’s what.’

“She actually allowed me to pick her paw up and look at her pads… there was real trust there. I took her back to the car. I knew I had a muzzle because I knew she wouldn’t let me actually pull something out and so I explained to her that that was for her protection as well as for my protection.

“I was then able to help her and get the thorn out. But that would never have happened six months ago. She would have freaked out but now she trusts me and told me that there was a problem.”

Isn’t that amazing? If you have a reactive dog of your own, I hope Stella and Henna’s story inspires you to never give up! It is so important to listen to your dog and support them in any way that you can. Building trust and a heart connection with your dog is vital if you want your relationship to grow into a brilliant partnership.

Here are Stella’s words on her experience with Henna and the BPA:

“After just 6 months of being in BPA our lives are transformed. We work together, but I am responsible for Henna feeling safe in situations that are difficult for her, most importantly I do my best to keep those difficult situations to a minimum. The future holds no boundaries, it is so exciting and full of joy. I feel so deeply connected to both my girls.”

A Sensitive Dog in a Big Scary City with Ulla Kjeldgaard

Having a sensitive dog in a huge city packed with racing cars, zooming

How to Help Dogs with Fear of Thunder and Fireworks

It’s that time of year. If you have a dog who is afraid of

How to Enjoy a Perfect Life with Your Perfect Dog